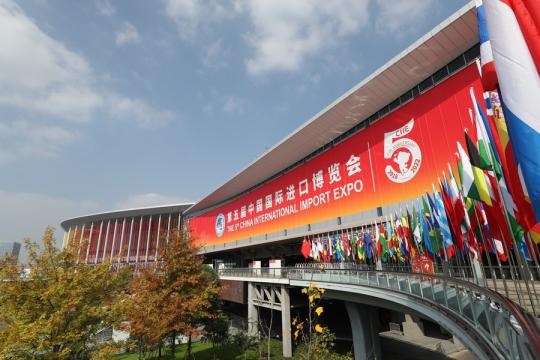 This photo taken on Nov 2, 2022 shows the west entrance of the National Exhibition and Convention Center (Shanghai). (Photo/Xinhua)

Shanghai will continue to deepen its reform and opening-up to the world, carry on with innovation and embrace investors from across the world, Shanghai Mayor Gong Zheng said at the city's promotion convention on Sunday.

Gong said the city will constantly reform and perfect the market to ensure fair competition for enterprises at home and abroad and of various scales. Meanwhile, opening-up will be firmly carried out, as it is one of the main drivers of promoting Shanghai's development. Furthermore, innovation will play a key role in the city's development.

In this way the city will strive to provide the best environment and service to create more opportunities for investors from around the world, Gong said.

To further enhance its strengths in this area, Shanghai has revised and published its regulations to encourage such corporations to set up their regional headquarters, said Zong Ming, vice-mayor of Shanghai.

Executives attending the event expressed their optimism on the outlook of the Chinese economy and their confidence in continuing to invest in Shanghai and China as a whole.

"China is our second-biggest market. It is very clear that if you want to be a global leader, you need to be No 1 in China," said Francis Liekens, vice-president of Atlas Copco (China) Investment Co.