Production at Foxconn hit by COVID-19 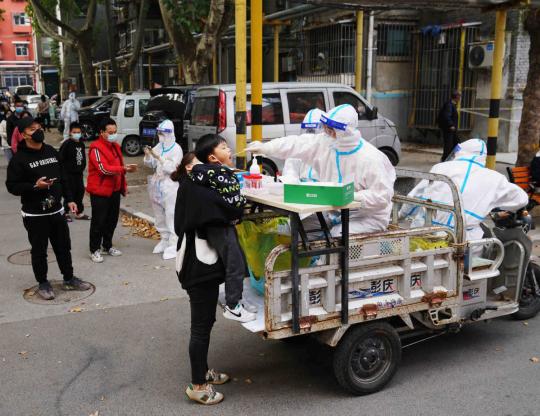 Authorities in Zhengzhou, Henan province — home to a mammoth electronics manufacturing factory recently affected by COVID-19 infections in the city — said on Sunday that efforts have been stepped up to facilitate the return trips of plant workers to their hometowns.

The Foxconn factory is the world's largest smartphone production base, with three campuses across the city and nearly 300,000 employees, according to the company.

As a rise in infections in Zhengzhou has disrupted public transportation and put pressure on the normal operation of the factory, some workers have been seen lugging suitcases and walking back to their hometowns.

It is unclear to what extent production at the Foxconn facility has been affected, but the company has suggested that production in some capacity is ongoing.

A user of the short-video app Douyin, with the handle Wangtianbao, began a journey from his Foxconn workplace in the Zhengzhou Airport Economy Zone to his home in Henan's Jiaozuo city on Saturday evening, according to videos he shared on the platform.

About 13 hours later on Sunday morning, he said in another video clip that he had arrived at a government-designated site, where returning workers like him were lining up, waiting to be carried in special vehicles to isolation venues in their hometowns.

The disease control authority of the zone in Zhengzhou said on Sunday afternoon that local officials and Foxconn are working together to organize vehicles to carry returning workers to their destinations.

Whether these employees leave or stay is completely up to them, it said.

"For those willing to stay on campuses, the government and the company will jointly work to ensure normal production, and strive to improve working and living environments," Foxconn said on Sunday.

No severe COVID-19 infections have been reported on Foxconn campuses, said the local government. The company has suspended indoor dining and is only allowing masks to be taken off in dormitories.

Other cities and counties in Henan province have also ramped up preparedness for receiving Foxconn workers.

The COVID-19 control authority in Qinyang city said over the weekend that returning workers from Foxconn should register their travel information online and meet at expressway checkpoints, where buses will be arranged to send them to centralized quarantine facilities for a seven-day isolation.

Luohe city said that it has set up reception stations at several highway stops or road junctions of major freeways, offering hot water, food and antivirus materials for returnees waiting for transfer buses.

Xiangcheng county said that for those who cannot meet at-home isolation requirements — such as having a separate room and not sharing bathrooms with other family members — local authorities would assign hotel quarantine rooms and provide daily meals for them.

Beijing, the capital, had reported at least 27 infections linked to a shopping mall in Cangzhou city in Hebei province, as of Sunday afternoon.

The Beijing Center for Disease Prevention and Control said in a notice released over the weekend that companies and institutions in Beijing are advised not to hold in-person annual meetings, training or galas.

Urban-rural fringe areas and villages have been ordered to strengthen the screening of people coming from outside. Wedding ceremonies should be simplified and large gatherings reduced, it said.