Oil stocks up as OPEC may cut output 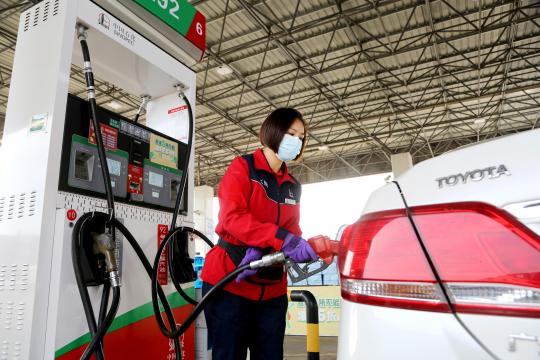 An employee fills up a car at a gas station in Lianyungang, Jiangsu province. (PHOTO by WANG CHUN/FOR CHINA DAILY)

Shares of China's oil and gas companies surged on Monday as the effects of a recent plan of a crude producers' alliance to cut oil production began to show.

Market observers attributed the share surge to the decision by the Organization of the Petroleum Exporting Countries and its allies, a group known as OPEC , to cut oil production from November to bolster oil prices that have tumbled recently over recession fears.

The 2 million barrels per day cut equals around 2 percent of this year's global oil demand.

International oil prices kept climbing during a five-day period from Oct 3 to 7, with the West Texas Intermediate crude oil up as much as 11.3 percent and Brent crude oil, the international benchmark, jumping 16.5 percent.

At its last meeting in September, OPEC decided to reduce oil production by 100,000 bpd this month. Crude prices have fallen to roughly $80 a barrel from more than $120 in early June amid growing fears about a possible global economic recession.

Luo Zuoxian, head of intelligence and research at the Sinopec Economics and Development Research Institute, said the reduction of production quotas by OPEC members by 2 million bpd will have a temporary impact but might not lead to a drastic increase in oil prices over the long term.

The decision to cut production to support oil prices will balance the rising shale oil and gas production in the United States, he said.

"Oil demand in China is expected to remain steady and we have sufficient oil reserves as well. As the country's oil majors have been stepping up domestic oil and gas exploitation and exploration in recent years, the (OPEC ) decision (to cut output) will have limited impact on China," he said.

Everbright Securities said the reduction of production quotas this time is the most drastic cut since May 2020. Global oil prices are expected to remain high due to insufficient capital expenditure in the upstream sector of the industry in the mid-to-long term.