America no longer 'shining city on a hill' 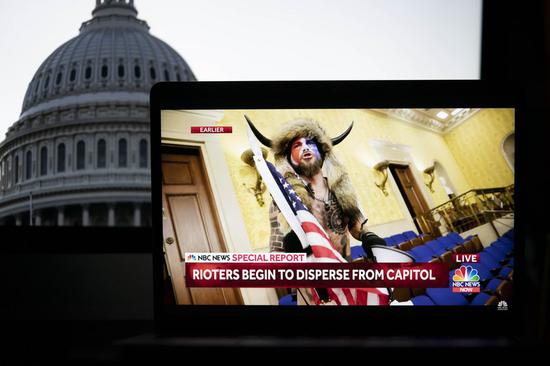 A protester breaking into the U.S. Capitol building is captured on a screenshot in a video feed from NBC news seen in Arlington, Virginia, the United States, Jan. 6, 2021. (Xinhua/Liu Jie)

The United States has long boasted about its own brand of democracy and freedom, calling itself a "shining city on a hill." To peddle American-style democracy, the country is putting together a so-called "summit for democracy."

However, as U.S. democracy has become dysfunctional and the American way of governance loses its appeal, many around the world have come to realize that the nation is no longer the "shining city" it once was.

On Thursday, White House press secretary Jen Psaki told reporters that the upcoming gathering would discuss how "to stand up for democracy around the world."

One wonders whether Psaki is aware of the sizable group of Americans who regard their democracy as dysfunctional.

Long gone is the era when Americans took pride in their democracy, one that was forced onto countries around the world with little consideration for reality on the ground.

A Yahoo News/YouGov poll conducted just before Independence Day in 2020 revealed that some 62 percent of Americans say the country is no longer a beacon and a model for the rest of the world.

More than one year later, a poll released Wednesday by the Harvard University Kennedy School's Institute of Politics showed 52 percent of young Americans believe that U.S. democracy is either "in trouble" or "failing," while just 7 percent deem it "healthy."

The United States has been so obsessed with lecturing other nations on the merits of liberal democracy, but recent data showed some of the intended pupils have become less interested after judging their tutor's own track record.

Survey results released in June by the Pew Research Center showed that most people in countries or regions the United States deemed "allies" view American democracy something they don't aspire to.

Across all the surveyed, roughly 30 percent say the United States is currently a good example of democratic values, and a median of nearly half of the surveyed consider the American political system to be working "not too well or not well at all."