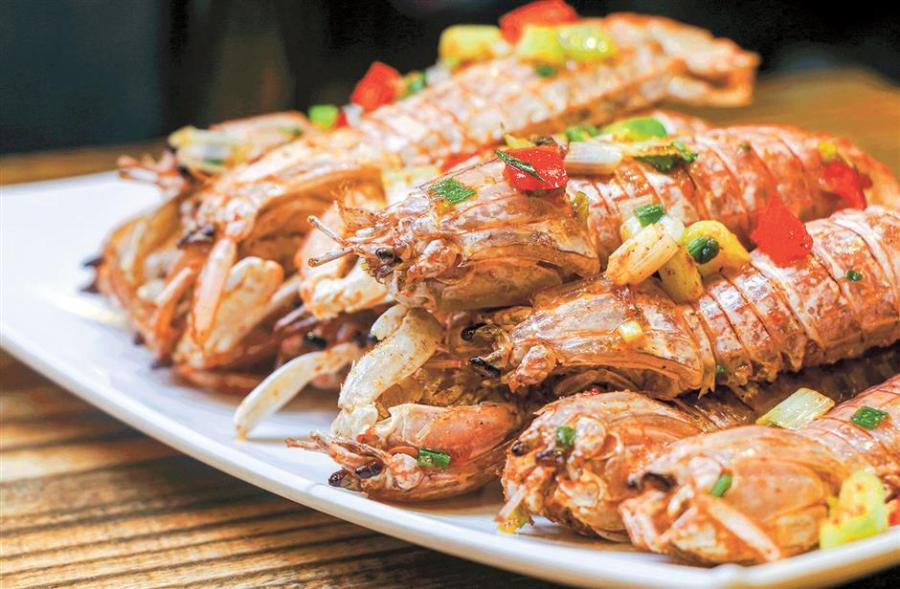 The meaty and sumptuous mantis shrimp is a crowd-favorite seafood which can be cooked in a variety of ways, and one should not miss the time slot of April to May because the female shrimps in spring contain rich and delicious roe.

In Cantonese cuisine, the mantis shrimp is also known as lainiaoxia, or pissing shrimp, because the crustacean tends to shoot water when picked up.

To cook the freshly caught mantis shrimp, simply steam them with some scallion, ginger and salt. The alien-looking shrimp has very hard shell and it’s not easy to break it apart, a method to try is cut both sides of the shrimp with a pair of sharp scissors so that the shrimp’s abdomen separates easily with the shell.

Be careful when cracking the mantis shrimp to avoid being hurt by the hard shell.

For a rich flavored and finger-lickingly delicious dish, deep-fry the mantis shrimps in boiling oil for 30 seconds before stir-frying them with ginger, scallion, garlic and spiced salt.

In 2017, mantis shrimp even became a popular meme online after game players of ygocore came up with the phrase “mantis shrimp, let’s go,” which was in the top 10 trendy Chinese Internet slang of the year according to the National Language Resource Monitoring and Research Center.