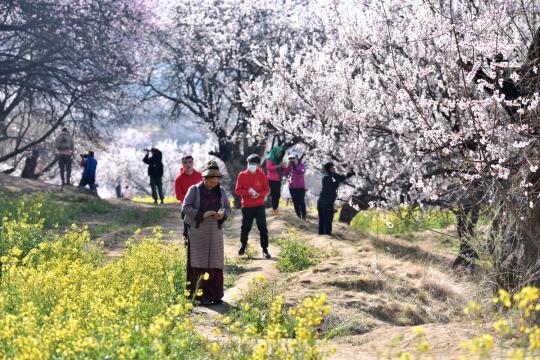 The Tibet autonomous region received more than 41 million tourists last year, and tourism revenues exceeded 44 billion yuan ($7 billion), according to an announcement at an annual meeting of the regional people's congress recently.

Tibet has been a popular destination for domestic and overseas tourists for decades due to its rich heritage, natural appeal and unique traditional cultures.

In recent years, the region has been making a major effort to upgrade the quality of services for tourists. Cultural products and incentives have been introduced to benefit both visitors and business operators.

Wang Songping, the head of the region's Department of Tourism Development, was recently quoted by local media as saying that tourism offers a window into the region's unique features.

With its beautiful lakes, snowcapped mountains, forests and a wide variety of cultural activities, Nyingchi city is a major attraction.

According to its tourism development bureau, Nyingchi invested more than 110 million yuan on infrastructure in its major tourism spots last year. Official data from the bureau shows that it is home to some 700 guesthouses owned by rural residents, that received 4 million visits last year.

Last year, 27,000 rural residents found job opportunities in tourism, an increase of 4 percent year-on-year. Around 1.38 million tourist visits were made to operators in rural Nyingchi, generating over 178 million yuan in revenues.