Universal Resort's river to be completed in November 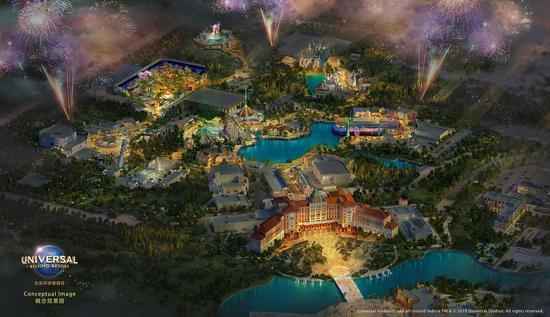 Construction of a river through Universal Beijing Resort, a major theme park scheduled to open in May next year, will be completed in November, according to the municipal government on Thursday.

In the future, visitors will be able to enter the theme park via boat.

The 2.8-kilometer-long waterway will wind like a ribbon through the resort area in the cultural and tourist zone in Beijing's subcenter, starting from Jiukeshu Middle Road to the west side of East 6th Ring Road.

Hotels with small docks will allow guests to board boats that will carry them to the main entrance of the park.

The waterway project was started in September but was delayed. Work resumed on March 10.

At present, the river structure has been completed, and other work is underway, including river bank greening, river bottom seepage reduction and the construction of a water treatment station.

The project, when completed, will feature landscapes of 40 to 100 meters wide and a water area of about 120,000 square meters for the resort.

Landscape greening along the banks will be divided into four major segments, according to the plan.

There will be eight major tourist spots along the waterway, all of which will get their names from ancient and modern poems about the Grand Canal.

The park is an outgrowth of the signature Universal Studios Hollywood theme park that opened in 1964.