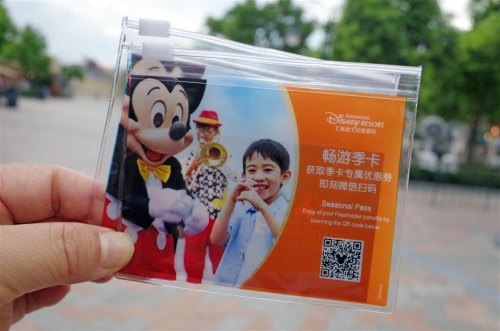 An autumn and winter seasonal pass to Shanghai Disneyland.

The change is effective immediately, the resort said in a statement and applications will be processed within three days.

The statement was made after some recent media reports discussed whether the 300 yuan (US$47.70) processing fee was excessive, and mentioned that such a fee wasn't charged in other Disney parks worldwide.

The resort develops its ticket products with terms and conditions which incorporate a variety of factors, today's statement read, including the prevention of fraud.

Disney added that their policies are subject to periodic review "based on operating conditions and customer feedback."

Based on advice and recommendations, as well as the park's "ongoing effort to optimize the service we provide to our guests," the fee was dropped.

It stressed, however, that as with all ticket products, admission to Shanghai Disneyland is subject to the park rules and regulations.

"We remind each guest to safeguard their seasonal pass in good condition, as guests will need to use their passes for their first and subsequent visits," the resort said.

A heated debate on the processing fee started in late March when a consumer complained to local media that she was asked to pay nearly half the cost of her child's 645 yuan seasonal pass to replace it when it was lost.