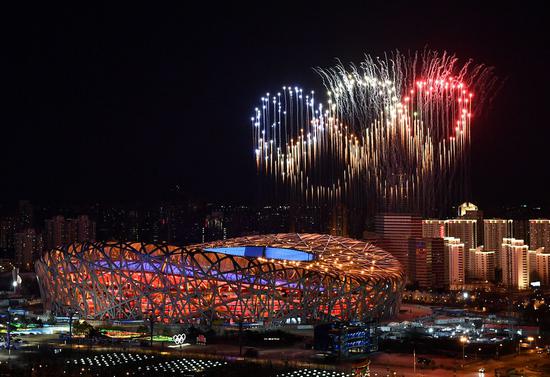 Fireworks illuminate the night sky during the opening ceremony of the Beijing 2022 Olympic Winter Games at the National Stadium in Beijing, Feb. 4, 2022. (Xinhua/Li Xin)

The Beijing 2022 Olympic Winter Games officially commenced on Friday, and the opening ceremony, as the curtain raiser to the Games, won much praise from overseas participants.

With incredible light shows and spectacular fireworks, delegations from 91 countries and regions gathered in the National Stadium, or the Bird's Nest, to witness the Chinese capital becoming the first ever dual Olympic city in the world.

"We all looked forward with great anticipation to an exciting opening ceremony. It is very different but is as exciting as Beijing 2008," said International Olympic Committee President Thomas Bach, who joined the crowd and watched the ceremony featuring an estimated 3,000 performers.

"It's a big show, and is the evolution of Beijing 2008," exclaimed Gianni Merlo, president of International Sports Press Association. He had been impressed by the magnificence of the Summer Games ceremony, and gave applause to the streamlined new one.

Seated among reporters of media outlets from all over the world, Masaru Komatsu with Tokyo Sports Press constantly pulled out his cell phone to shoot the remarkable moments.

"Though it's very cold tonight in Beijing, I can feel the fervor of spectators on site, and I am going to write a story about how exciting the opening ceremony is," said the 30-year-old. "I love the design of the countdown with fireworks, and the blue and green fireworks seem to brighten up the winter."

Maarten Delvaux, a Belgian journalist who had reported the Tokyo Summer Olympics and some international football events, felt thrilled to see the performances on site, as Beijing 2022 marks his first Winter Olympics and first visit to China.

"Beijing 2008 had a massive ceremony," Delvaux said. "This one is a little bit smaller, but I think it kind of delves more into Chinese cultural elements."

Athletes of the participating countries and regions paraded into the ceremony, ordered by the number of strokes of Chinese characters, and Claudia Pechstein, one of Germany's most successful athletes, proudly carried the German flag amid loud cheers.

"To carry our flag is a great honor, it is somehow the dot on the 'i.' It means more to me than all of my medals I won so far," the 49-year-old, who is to compete in her eighth Winter Olympics, said in an interview with Xinhua.

"It's really a modern and low-carbon ceremony," said Russia's Yulia Temelidi, a 19-year-old volunteer serving the Games. "I was so touched by the wonderful shows, and I am so proud to be part of it."