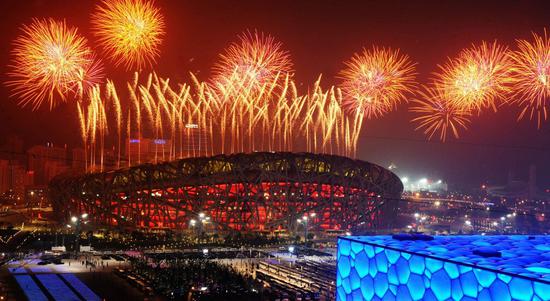 Photo taken on Aug. 8, 2008 shows the fireworks displayed during the opening ceremony of the Beijing Olympic Games held in the National Stadium, also known as the Bird's Nest, in Beijing, capital of China. (Xinhua/Xu Jiajun)

Expect a Beijing 2022 opening ceremony that is "different" from that of the 2008 Games with a way of cauldron lighting "unprecedented in the over 100-year history of the Olympic Games," as disclosed by chief director Zhang Yimou.

Zhang, who directed the opening and closing ceremonies for Beijing's 2008 Games, will be behind the wheel again for the ceremonies of the Olympic and Paralympic Winter Games, Xinhua learned on Friday.

The 71-year-old thus become the first man to direct both Summer and Winter Games ceremonies as Beijing makes history as the first dual Olympic city.

"It's a great honor to direct the opening ceremony for the second time," Zhang told Xinhua in an exclusive interview, adding that "the burden is very heavy."

"I hope to make a good impression and create some wonderful moments that will go down in history," he said.

RECREATE, INSTEAD OF REPEAT

An elite of the Fifth Generation of Chinese filmmakers, Zhang had already made himself known with three Academy Awards nominations for Best Foreign Language Film for Ju Dou (1990), Raise the Red Lantern (1991), and Hero (2003) among other prizes and recognitions.

The scintillating opening ceremony of the 2008 Games added to his prestige. He also masterminded Beijing's eight-minute handover performances at Athens 2004 and PyeongChang 2018.

It is because of these profiles that the BOCOG decided to appoint him again, according to Chang Yu, director of BOCOG's opening and closing ceremonies department.

"Director Zhang Yimou created the impressive 2008 Games opening ceremony that wowed the world. In 2017, we hired him to take charge of the eight minutes in Beijing, and he was able to present the world a different China in such a limited time with a well-received show. Therefore, when we decided on the chief director in 2019, we chose him again after careful deliberation," said Chang.

Despite the highly-rated 2008 masterpiece, Zhang never thought of repeating it.

"I think a lot of classics cannot be duplicated. They happen only once," said Zhang.

"Of course, we know that we cannot repeat Beijing 2008, so we are striving to be different from it."

Besides incorporating characteristics of the Winter Olympics and winter sports to the opening ceremony this time, Zhang pointed out that the theme will not be the same.

"In 2008, the Olympic was a brilliant stage and chance for our country to show ourselves. In fact, there are a plenty of pages across our 5,000-year history that we would like to present to the world. Our civilization, our history, and how we got to where we are today," he recalled.

"It's different now. China's status in the world, the image of the Chinese, and the rise of our national status, everything is totally different now."

"In the wake of the pandemic, the world needs a new and strengthened vision, that is, people of the world come together to face difficulties and look forward to a bright future," said Zhang, referring to the change of the Olympic Motto which added "Together" to "Faster, Higher and Stronger."

Therefore, challenging as it is, Zhang is determined to present a "different and unique" opening to the 2022 Games.