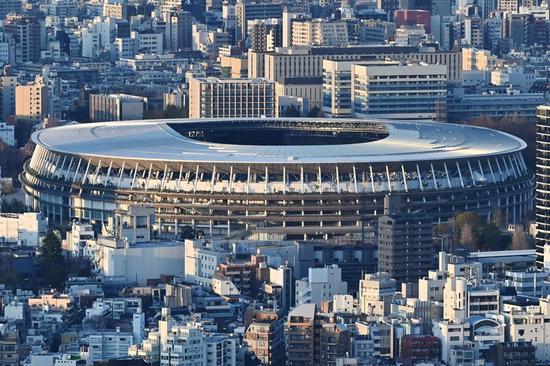 The newly-built Japan National Stadium, the main venue for the 2020 Olympic Games, is pictured from a highrise viewing area in Tokyo on March 25, 2020, the day after the historic decision to postpone the 2020 Tokyo Olympic Games. (Photo/Xinhua)

Tokyo 2020 spokesman Masa Takaya on Thursday denied reports from Japanese media that all the venues for the Olympic and Paralympic Games had been secured and made an apology for concerned parties who have been affected by the rumors.

Takaya told a press conference that talks between Tokyo 2020 and venue owners are still ongoing, and such reports are "unfortunate."

"We have to make it clear that this is an ongoing discussion," he explained. "The organizing committee has not made such announcements at this stage and during this process.

"It is unfortunate such reports based upon this optimistic view concerning the ongoing discussions. We are considering that many involved parties have been affected by these media reports in this respect, we are sorry about that.

"We are very keen to keep continuous discussions with concerned parties, particularly with the venue owners."

A dozen major local media outlets have quoted sources from the organizing committee that the remaining 20 percent of venues for the games have been secured. Tokyo 2020 announced in June to have cemented 80 percent of the sites.

Takaya said that it was impossible to find who leaked the information, although it has long been a problem.

Takaya said that he has been "encouraged" by the resumption of Japan's baseball and football leagues despite continuous rising confirmed COVID-19 cases in Tokyo in the past week.

A total of 224 new cases of the coronavirus were confirmed in Tokyo on Thursday, the highest-ever daily total for the Japanese capital.

A survey conducted by the Japan News Network (JNN) last weekend found that 77% of those questioned said that the Tokyo Olympics "cannot be held" next year.

"These two sports leagues absolutely are bringing smiles to fans or those team supporters," he said. "I have been very encouraged by the scenery. The new dates are already set...We are even more determined to deliver the games."