Olympic flame to be kept in Tokyo 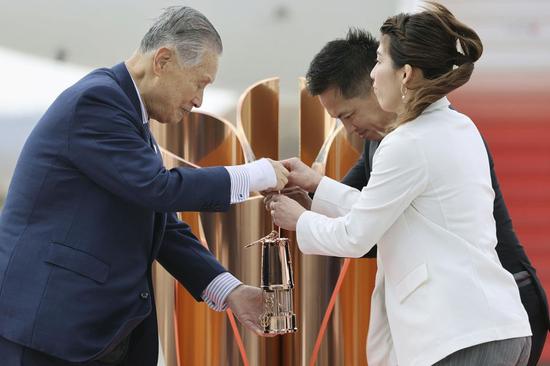 Olympic gold medalists Tadahiro Nomura (C) and Saori Yoshida (R) hand over the flame to President of Tokyo Organizing Committee of the Olympic and Paralympic Games (Tokyo 2020) Yoshiro Mori during the Olympic flame arrival ceremony in Miyagi of Japan, on March 20, 2020. (Kyodo News/Handout via Xinhua)

The Olympic flame will be displayed in Fukushima for a month before being kept in Tokyo, local reports said on Sunday.

Japanese broadcaster NHK said that the flame, which arrived in Japan from Athens on March 20, will be on display in J-Villiage, Fukushima from April.

"The show will be managed carefully to avoid coronavirus spread," the report said. "It would be suspended should there is a big crowd."

The flame will be brought back to Tokyo but Tokyo 2020 has not decided where to keep it before the torch relay starts next year.