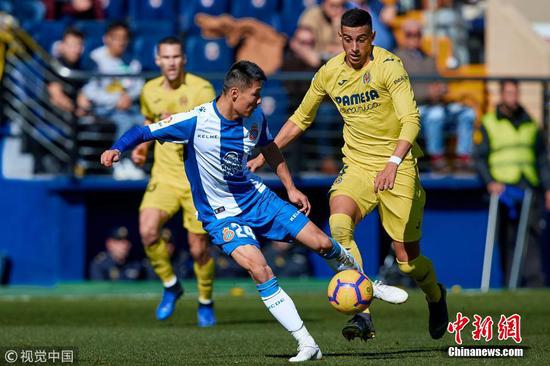 Wu Lei kicks the ball during the La Liga clash between Villarreal and Espanyol at Estadio de la Ceramica on Feb. 3, 2019. (Photo/IC)

One performance does not define a season – particularly in the erratic and ever-changing world of European soccer – but Wu Lei is seemingly adapting well to life at his new club, judging by his debut for a rejuvenated Espanyol.

The former Shanghai SIPG striker came on as a substitute for the final 12 minutes of a dramatic La Liga clash which saw Espanyol fight back from two goals down to earn a 2-2 away draw at Villarreal on Sunday.

As only the second Chinese footballer to join the Spanish league, Wu has attracted plenty of attention ahead of the game, and all eyes were on the 27-year-old when he was summoned by Espanyol coach Rubi to replace defender Didac Vila, who struggled to cope with pressure and clear their lines as Villarreal coasted into a two-goal lead, thanks to a flurry from Vicente Iborra and Santi Cazorla.

Javier Calleja's side could easily have been out of sight by the hour-mark, such was their dominance. But the tie took on a sudden, unexpected late twist as perhaps the arrival of Wu during the winter transfer window has resuscitated the Lady Luck, who finally smiles on Espanyol.

Just before the China international ran on to the pitch, his side halved the deficit in unusual fashion. Villarreal's ever-reliable shot-stopper Sergio Asenjo inexplicably spilled a ball into the path of his own defender Daniele Bonera and the former AC Milan defender could do nothing but see the ball agonizingly rolled into his own net.

That was the cue for a Villarreal implosion and surely there were even more drama to come. Barely three minutes after Wu made his entry, Espanyol sealed the comeback when a slick passage of play involving the Chinese star resulted in Roberto Rosales unleashing a goal of the season contender into the top corner.

While Wu failed to get on the scoresheet in his cameo appearance at the Estadio de la Ceramica, he showed a few flashes, drawing a foul and a booking on Iborra whose cynical foul put a potentially dangerous counter-attack to a premature end.

Having taken up his position on the right-hand side of Espanyol's frontline, Wu looked calm, composed and controlled with a nerveless display.

The prolific star, who netted 27 times in the Chinese Super League last season, even had a chance to become the cult hero his beleaguered side urgently needs when he found space in the area deep in injury time, but his shot from close range was smothered by an onrushing Villarreal defender. And Wu could only reflect that this was La Liga who delivered its finest hour.

"I'm very happy and I want to thank the coaching staff for letting me play in this game," he said of his first appearance. "[Rubi] has told me where should I play on the pitch, and I really appreciate the confidence he has placed in me."

"When I came off the bench it was 2-1 and I'm delighted we were able to do something," he added.

One thing is for certain, his campaign to demonstrate Chinese players can gain a foothold in Europe's top leagues got off to a positive start.