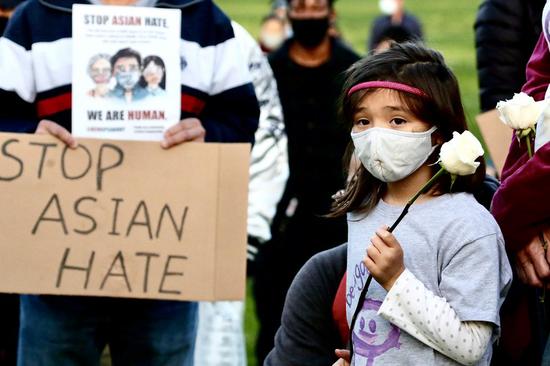 Some 31 percent of Asian American residents in San Gabriel Valley in Los Angeles County, one of the largest Asian communities in California and the United States, said they or their family experienced a hate incident based on their race or ethnicity since the COVID-19 outbreak, a new survey has found.

According to the survey report published by two non-profit organizations, Asian Youth Center and Asian Americans Advancing Justice - Los Angeles, on Wednesday, hate against the Asian community has been on the rise during the pandemic, with most of these hate incidents involving insults or verbal abuse.

The survey also found 55 percent of respondents do not feel there is support in their community for victims of racial discrimination or harassment, while 49 percent of parent respondents indicated they have concerns about their children returning to school regarding bullying and anti-Asian hate.

At the national level, Stop AAPI (Asian American and Pacific Islander) Hate has received over 9,000 reports of hate incidents from March 2020 to June 2021, including over 5,700 cases of verbal harassment and over 1,200 cases of physical assault. Mirroring national and county-wide trends, 219 anti-Asian hate incidents have been reported by San Gabriel Valley residents to Stop AAPI Hate since the start of the COVID-19 pandemic, with 21 percent reported by youth under 18, according to the report.

Over 300 residents responded to the survey, of which 284 met the eligibility criteria to be included in the final analysis.

"San Gabriel Valley is one of the most important Asian communities in California and we are here for individuals who don't know where to turn for confidential, safe support," said Connie Chung Joe, CEO of Asian Americans Advancing Justice - Los Angeles, in a statement.