Violence against women increases due to COVID-19: UN Women report 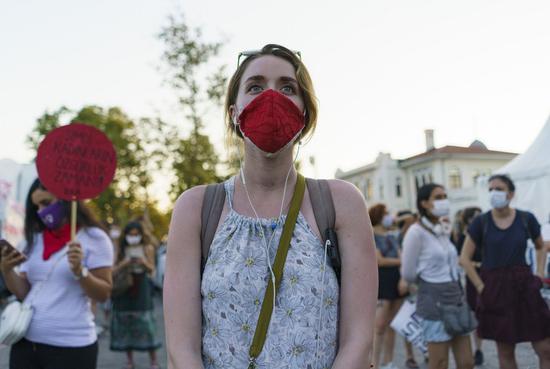 Turkish women attend a rally in protest of violence against women in Istanbul, Turkey, on Aug. 5, 2020. (Photo by Huseyin Aldemir/Xinhua)

A new report of UN Women has highlighted the impact of COVID-19 on women's safety at home and in public spaces.

Almost half of women reported that they or a woman they knew experienced a form of violence since the start of the COVID-19 pandemic, according to the report, "Measuring the shadow pandemic: Violence against women during COVID-19," which is based on survey data from 13 countries.

About a quarter of women were feeling less safe at home while existing conflict increased within households since the pandemic started, according to the report, released on the eve of the International Day for the Elimination of Violence Against Women, which falls on Nov. 25.

When women were asked why they felt unsafe at home, they cited physical abuse as one of the reasons (21 percent). Some women specifically reported that they were hurt by other family members (21 percent) or that other women in the household were being hurt (19 percent).

Outside their homes, women were also feeling more exposed to violence, with 40 percent of respondents saying they felt less safe walking around alone at night since the onset of COVID-19. About 3 in 5 women also thought that sexual harassment in public spaces worsened during COVID-19.

Socio-economic stress factors such as financial pressure, unemployment, food insecurity and tense family relations stood out as having a significant impact not only on experiences of safety (or violence), but also on women's well-being overall.

"Violence against women is an existing global crisis that thrives on other crises. Conflict, climate-related natural disasters, food insecurity and human rights violations all contribute to women and girls living with a sense of danger, even in their own homes, neighborhoods, or communities," said UN Women Executive Director Sima Bahous in a press release. "The COVID-19 pandemic, which necessitated isolation and social distancing, enabled a second, shadow pandemic of violence against women and girls, where they often found themselves in lockdown with their abusers. Our new data underlines the urgency of concerted efforts to end this."