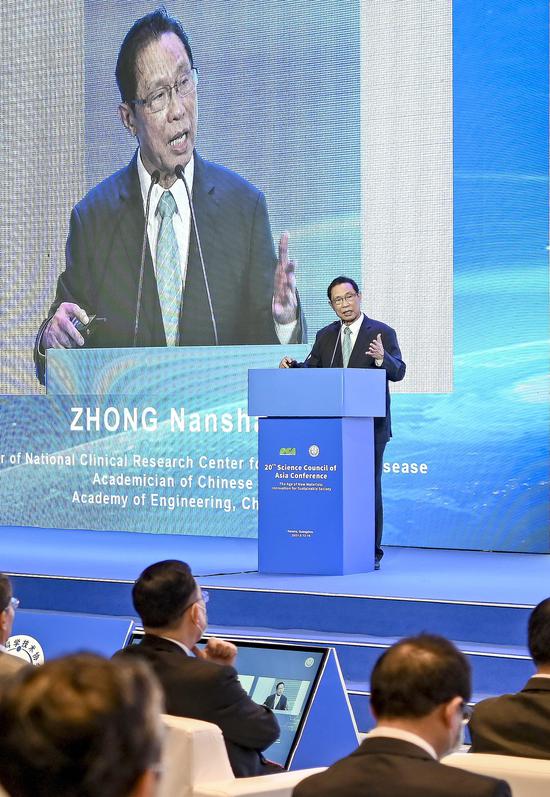 Zhong Nanshan delivers a speech at the 20th Science Council of Asia Conference in Guangzhou, Guangdong province, on May 13. CHEN JIMIN/CHINA NEWS SERVICE

It's been a year since Zhong Nanshan, a prominent Chinese respiratory disease expert, received the Medal of the Republic, the country's highest honor for those who have made great contributions to the construction and development of the People's Republic of China, for his outstanding contribution in battling the COVID-19 epidemic.

At the award ceremony in Beijing on Sept 8 last year, he called on Chinese medical workers to maintain their vigilance against the novel coronavirus and appealed to the international community to step up cooperation in disease control and scientific research.

"Even though our fight against the virus has achieved some initial success, we should not relax and must exercise prudence as always," he said.

At the time, China had successfully reined in the first wave of the epidemic－which hit Wuhan, Hubei province, the hardest from late December to early April－as well as several sporadic local outbreaks. But the global situation remained complicated and no vaccine was available.

"We will join hands with national and international medical workers to overcome difficulties in tracing the virus' origins, cutting off transmission, creating rapid diagnostic kits and new drugs, and strive to make breakthroughs in saving severe cases and developing vaccines," Zhong added.

In the past year, Zhong has fulfilled those commitments while retaining his candor and calmness in explaining disease control policies and addressing top concerns from the public. Approaching his 85th year, he is showing no sign of slowing down.

Zhong is based in Guangzhou, Guangdong province, where he heads the National Clinical Research Center for Respiratory Disease and teaches at Guangzhou Medical University.

The province was the first in China to deal with the highly transmissible Delta strain, when local infections emerged in late May.

"Patients contracting the Delta strain carry a very high viral load and are thus more infectious. So their close contacts should be defined as people who had stayed in the same venue or building within four days before the patient began displaying symptoms," he said during an interview.

Because the city receives a large number of international travelers, he added that Guangzhou would set up a new quarantine hotel with 5,000 rooms for international travelers arriving in the city in order to stem the risk of cross infections at regular hotels used for isolation. The facility was expected to be put into operation this month.

When questions and doubts arose about domestic vaccines, Zhang also stepped up to unpack statistics for the public.

"The efficacy rate of Chinese vaccines is around 70 percent, and we need to vaccinate over 80 percent of the total population to establish herd immunity against the disease," he said. "Both laboratory test results and real-world studies have demonstrated that domestic vaccines are effective against the Delta strain. I am sending a very clear message to the public that we should get vaccinated."

Zhong is also a member of the Independent Panel for Pandemic Preparedness and Response. The panel, comprising 13 international experts, was convened by the World Health Organization in July last year to review the global response to COVID-19 and put forward suggestions for containing the virus.

After a report was released by the panel in May, Zhong said during an interview that all experts on the panel had worked closely together via a great number of online meetings, interviews, paper reviews and other research efforts.

"The virus, a common enemy of humanity, is still raging in many countries," he said. "We should build a global, high-level institution leading anti-pandemic work, provide sufficient funds for fighting the virus, formulate plans to promote equal access to vaccines and give higher authority to the WHO.Nobody is safe until everyone is safe."

In addition to his expertise and candid words, which were also showcased when he led China's response to the severe acute respiratory syndrome outbreak in 2003, Zhong is also widely known for his ability to stave off the effects of aging.

Photos of him lifting dumbbells or running on a treadmill in his 80s have gone viral online, drawing respect for his discipline in exercising and staying fit.

However, in a rare admission of weariness during an interview with ifeng.com in April, Zhong said he had "aged a lot" in the past year.

"There is so much work to do, and I am feeling overloaded," he said. From managing the national respiratory research center, to participating in international meetings, Zhong said some tasks require him "to rack his brains".

"But I have found comfort and happiness in my work," he said.

Zhong said he drew strength and confidence from the fact that China's vaccine development is on par with world-leading countries and its vaccines have withstood rigorous tests from international experts.

He said another significant lesson he had learned from the epidemic is to apply the early detection and diagnosis method to his area of expertise.

"If we can adopt this principle in treating lung cancer and other respiratory diseases, China could be world-leading in this field in the future," he said. "This is my goal."