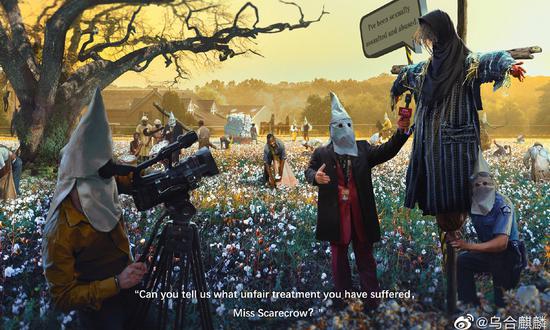 "Can you tell us what unfair treatment you have suffered, Miss scarecrow?" a reporter in a Klan hood asked a scarecrow who is being nailed to a column of shame while ignoring real slaves picking cotton behind their backs.

The satire illustration by Chinese patriotic cartoonist Wuheqilin released on Saturday has quickly gone viral on Chinese social media and it prompted netizens to share their own versions of the interpretation of the work. It echoed the recent Switzerland-based cotton organization Better Cotton Initiative (BCI) provoking some member companies to participate in the Xinjiang cotton ban.

The abbreviation of this painting – the Blood Cotton Initiative – happens to be the same as the Better Cotton Initiative of Switzerland, which took the lead in hyping up “forced labor” in the cotton industry from Northwest China’s Xinjiang Uygur Autonomous Region.

The piece depicts a scene of slaves picking cotton. In the painting, black people are working hard to pick it while the overseer, who is wearing a Klan hood, is watching them leisurely in the distance. However, such a scene was totally blind to the reporter and the cameraman in the Klan hoods, who is holding a microphone with an icon similar to BBC News and wearing a classic Western-style press card.

The scarecrow as an interviewee, however, was nailed to a cross and held by another Klan member wearing a police uniform similar to that of the police officers in Minneapolis. The scarecrow in traditional Uygur costumes could not speak, but a sign placed next to it was speaking on his behalf: “I’ve been sexually assaulted and abused.”

The satire piece touched the heart of many netizens, who have been engulfed in anger and grievance over the deliberate smearing and disinformation from the Western media on Xinjiang cotton and BCI’s ban.

Many people shared their understanding of the piece in their posts, trying not to miss any point that Wuheqilin has subtly implanted in the painting.

The illustration was believed to be directed at multinational companies H&M and Nike, the two brands that have been boycotted by Chinese customers, as a red mark on the trunk of a giant tree in the painting looking like the logo of H&M, and the antique cotton scale that the slaves used appeared similar to the logo of Nike.

A man hanging in the tree and the two bloody cut-off human hands attached to the scarecrow also added to the gore and misery of the painting, some people found.

Some foreign brands, including H&M and Nike, have maliciously refused to source cotton from Xinjiang, citing the BCI license suspension. BCI, a claimed non-governmental organization that aims to promote better standards in cotton farming, has suspended licenses to companies in Xinjiang.

The cartoonist Wuheqilin, who has been producing political caricatures for a while, gained international attention in his battle with Australian Prime Minister Scott Morrison over an art piece on Australian soldiers’ killing of Afghanistan civilians.