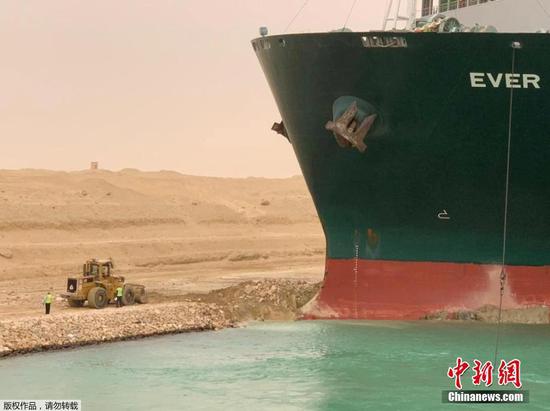 A Panama-flagged cargo ship wedged across the Suez Canal and blocked traffic in the vital waterway, March 25, 2021. (Photo/Agencies)

The Japanese owner of the giant cargo ship that has been blocking Egypt's Suez Canal since Tuesday has apologized for the disruption to global trade.

"In cooperation with local authorities and Bernhard Schulte Shipmanagement, a vessel management company, we are trying to refloat [the Ever Given], but we are facing extreme difficulty," the owner, Shoei Kisen Kaisha, said in a statement on Thursday.

"We sincerely apologise for causing a great deal of worry to ships in the Suez Canal and those planning to go through the canal," it added.

Marine and salvage engineers failed in their latest attempt on Thursday.

The 400-meter-long, 200,000-tonne vessel is almost the same size as Empire Building, is now blocking transit in both directions through one of the world's busiest shipping channels linking Asia and Europe, which accounts for about 12 percent of global trade.

A total of 206 large container ships, tankers carrying oil and gas, and bulk vessels hauling grain have backed up at either end of the canal, according to tracking data, creating one of the worst shipping jams seen for years.

The blockage comes on top of the disruption to world trade already caused in the past year by COVID-19, with trade volumes hit by high rates of ship cancellations, shortages of containers and slower handling speeds at ports.

The world's number one line A.P. Moller Maersk said it was considering diverting vessels around Africa's Cape of Good Hope, adding five to six days to the journey between Asia and Europe. It said time-sensitive cargo could be sent on trains and airplanes, although no decisions had yet been made.