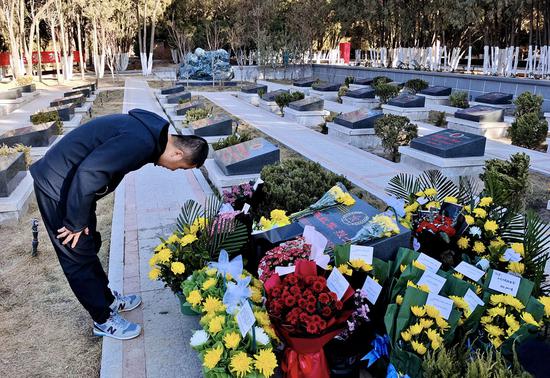 Guo Huaide pays respects in Lanzhou, Gansu province, on Saturday to Chen Hongjun, one of the four martyrs who died during the border clash with India in June. Chen was a college classmate of Guo. (Photo: Wei Dezhan/For China Daily)

Chinese netizens have paid tribute to four servicemen who died during a border clash with Indian troops in June last year.

Topics related to the four members of the People's Liberation Army Ground Force soon sparked a swarm of sentiment on the Sina Weibo social media platform after the Chinese military published details of the conflict with India, including the number of casualties and their names, for the first time on Friday.

The details were revealed in a report by PLA Daily, the Chinese military's flagship newspaper. It said the border tension escalated in June after Indian troops blatantly violated a bilateral agreement and crossed the Line of Actual Control.

Qi led several soldiers to negotiate with Indian troops at first, only to be deliberately attacked by the opposition, which caused his injuries. In a video released on Saturday for the first time by China Central Television, which recorded some of the clash, Qi can be seen bleeding from his head.

Chen Hongjun, Chen Xiangrong and Xiao rushed to rescue their comrades and died during the confrontation. Wang Zhuoran drowned in the icy river on the plateau while he was trying to save another comrade.

Chen Hongjun was awarded the honorary title "Hero Safeguarding the Motherland and Protecting Borders" by the Central Military Com-mission, the highest award given by the PLA. The other three each received a first-grade service citation, the second-highest award granted.

As soon as the news was released online, associated topics began trending on Sina Weibo. On Saturday, at least 12 still topped the list of the platform's 50 top-trending topics.

Millions of netizens commemorated the deceased soldiers by reposting, leaving comments and composing their own posts.

The most searched hashtag was "they died for me". A Weibo user using the name Yuedingchengshu wrote in a poetic format: "Dusk arrives. Steamed rice in my bowl. Soft drink in my hand. Can't fathom why sturdy soldiers die. I woke up in the middle of the night, startled to realize: They died for me." The post was widely circulated online.

Some other trending topics read"10 details of the border clash scene", "One soldier is one boundary marker", "Not an inch of the motherland can be lost" and "The diaries and letters of the five border heroes".

The trending topic "Netizens pay tribute to border heroes with moving messages" had garnered more than 46 million views by Saturday.

A user going by the name Yunshangyouqingtian wrote under the topic: "Some people died for us. Some people are ready to die for us. So we must live harder."

Pictures of the four soldiers were also widely circulated online. In one, Chen Xiangrong smiles at the camera with a half-peeled orange in his hands.

"If there is an afterlife, I hope you will have an endless supply of sweet oranges at the wonderful age of 20. When you open your arms again, you will no longer be facing swords and spears, but the warm embrace of your family," wrote another person using the name RedaQmancy.

On Saturday evening, the Ministry of Veterans Affairs announced more details of the pensions and preferential treatment for family members of the four martyrs.

The ministry set up a special team and accompanied the martyrs' relatives to attend the grand memorial ceremonies during which the martyrs' remains were returned and buried in mausoleums in their hometowns in Gansu, Henan and Fujian provinces. The veterans affairs departments of the three provinces have distributed commendation awards and lump-sum pensions to the four martyrs' families.

The veterans affairs departments of Fujian, Henan, Gansu and Shaanxi province, where their families and relatives now live, also assigned special personnel to stay in touch with the family members and help with the timely resolution of difficulties.

Chen Xiangrong's mother has been working outside Fujian to make a living. After learning the situation, the local government offered both her and Chen's older sister jobs in their hometown.

In Henan, where Wang Zhuoran and Xiao Siyuan were born, the local authorities helped Wang's younger sister get into a vocational high school and offered her an internship.

Chen Hongjun's wife, who lives in Xi'an, capital of Shaanxi, was more than five months' pregnant when he died. The departments of veterans affairs in Shaanxi and Gansu provided her with maternity services. As she graduated with a master's degree in vocal music, the Shaanxi veterans affairs department worked with the local education department and offered her a position as a teacher at the Xi'an Conservatory of Music.