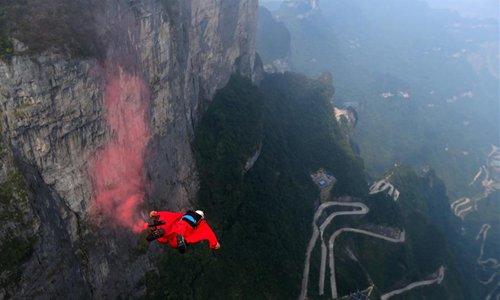 The body of a female wingsuit pilot who had been missing for six days in Zhangjiajie, Central China's Hunan Province, was found Monday morning. Park officials confirmed on its Weibo account the pilot died because she didn't open her parachute.

Rescue teams said they found the body of the female pilot who went missing during a film shoot when the pilot deviated from a planned route, losing contact with the production crew on May 12.

A search and rescue helicopter found the body almost 900 meters above sea level with a straight-line distance of about 2,000 meters from its take-off position, according to the Weibo post.

Local villagers searched the area for three hours before finding the body amid thick trees that almost block the sun entirely, according to media reports. By Monday afternoon, rescuers were seen carrying the body down a hill.

On May 12, a Beijing-based culture and media company shot a short extreme sports video at Tianmen Mountain scenic area and at 11:19 that day, two wingsuit pilots departed in a helicopter and flew at an altitude of about 2,500 meters to complete the high-altitude winged flights, but one of them deviated from the planned route.

The discovery of the body made Weibo's Top 3 trending stories for Monday, where it had received over 22 million views.

Netizens said they felt regretful for the wingsuiter who died at such young age, claiming that extreme sports could be highly dangerous, and those who engage in outdoor activities need to be more careful and be safe.