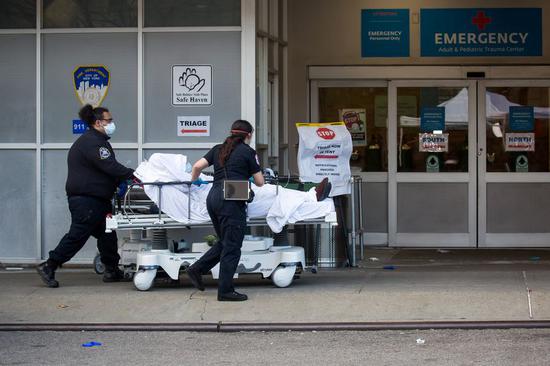 Healthcare workers bring a patient into the emergency room at Maimonides Medical Center during the coronavirus pandemic in the Brooklyn borough in New York, the United States, April 8, 2020. (Photo by Michael Nagle/Xinhua)

The latest data shows that the United States has suffered the most from the COVID-19 pandemic, with over 1.4 million cases and a death toll of 88,230. Despite the severe situation, some U.S. politicians are still bent on shirking their responsibilities.

It is hard to believe that the wealthiest country on earth could have the greatest number of confirmed COVID-19 cases and caused huge pressure on the pandemic prevention and control efforts worldwide.

Instead of reflecting on and improving the country's prevention work, a few U.S. officials have insisted on shifting blame. 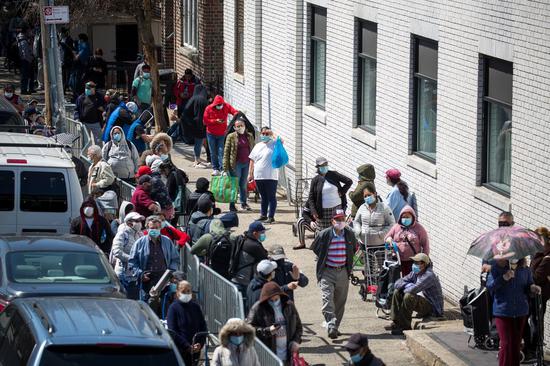 People wait to receive food at a food distribution site in the Brooklyn borough of New York, the United States, May 14, 2020. (Photo by Michael Nagle/Xinhua)

Since the outbreak, these U.S. officials have blamed China simply for being the first country to report the disease, asked China to shoulder ungrounded responsibilities, and even demanded reparations from China, while they themselves attempted to cover their tracks and failure to properly deal with the pandemic.

Lies evaporate in the light of truth. In fact, the United States' failures in its response to the virus have triggered criticism.

The U.S. government had not declared a national emergency until March 13, 70 days after it was notified by China of the new virus on Jan. 3, 40 days after it closed its borders on Feb. 2 to all Chinese citizens and foreign nationals who had traveled in China within the previous 14 days.

While China was making all-out efforts to curb the disease and work with the international community to tide over difficulties, the U.S. side was preoccupied with identifying scapegoats and mishandled the situation, which contributed to the accelerated spread. 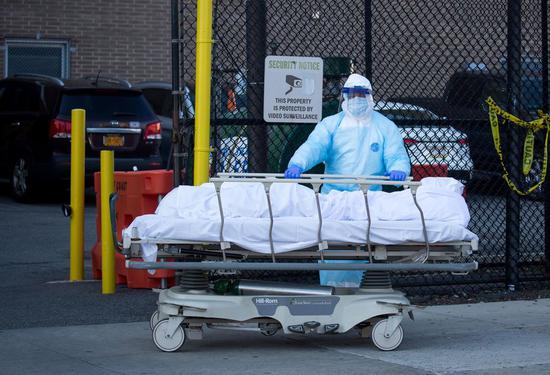 A medical worker transfers the body of a victim who died of COVID-19 at a hospital in New York, the United States, April 6, 2020. (Photo by Michael Nagle/Xinhua)

Furthermore, the United States, the world's sole superpower, has been missing in action in the international community's joint anti-virus efforts.

People can see that the U.S. side took a series of irresponsible steps, such as announcing a suspension of funding for the World Health Organization (WHO), shifting blame to China and the WHO, intercepting other countries' prevention materials and accelerating the repatriation of "illegal immigrants" to Latin American countries, to evade its due responsibility for preventing the spread of the pandemic.

The medical journal The Lancet said in an article on April 25 that global health and global health security need a strong WHO, which in turn needs strong support from the United States. 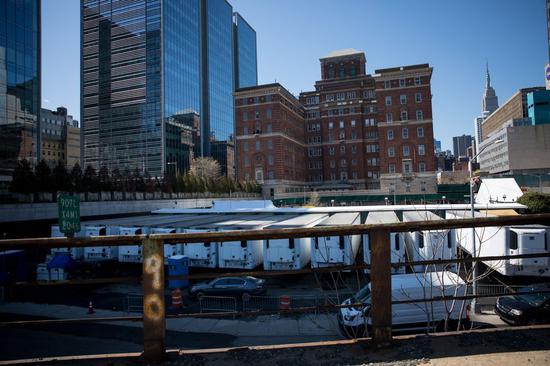 Trucks used as storage for bodies of victims who died of COVID-19 are seen in New York, the United States, April 6, 2020. (Photo by Michael Nagle/Xinhua)

Moreover, some U.S. politicians spared no effort to cover up the truth and mislead people to win support at the ballot box.

According to some U.S. media outlets, sources from the U.S. Centers for Disease Control and Prevention (CDC) said that the White House, considering the current number of U.S. fatalities too high, has pressed the CDC to change how they count coronavirus deaths, so that lower death tolls will be reported.

The public has little appetite for playing the blame game, which will not resolve the pandemic. At this critical moment, what the U.S. politicians need to do is to take part in the global efforts to defeat the virus, instead of dodging their responsibilities.