Spain to quarantine all arrivals from overseas 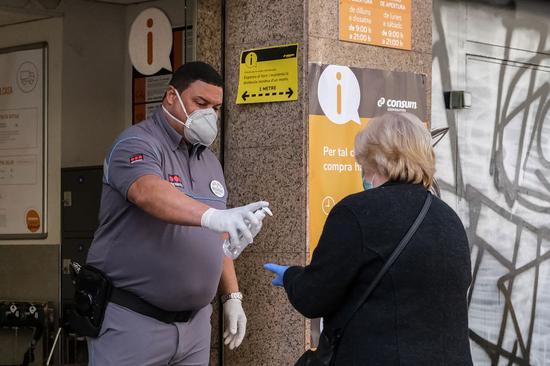 A security guard offers disinfectant gel to a woman at the entrance of a building in Barcelona, Spain, on May 11, 2020. (Photo by Sergi Camara/Xinhua)

The Spanish government announced on Tuesday that it will impose a 14-day quarantine on all travelers who arrive from another country as another measure to help stop the spread of COVID-19.

The measure was published in the official State Bulletin (BOE), which said that incoming travelers will have to remain indoors and only be allowed outside in order to shop for food, to visit health centers or in a "situation of need," and they would be obliged to do this while wearing a face mask.

The order comes into effect on May 15 and expires on May 24, when the current State of Alarm, which limits freedom of movement in the country, is due to end.

However, if the Spanish government are able to win the support of Parliament for a further extension of the State of Alarm, then the quarantine measure would be prolonged until June 1.

Spain's land borders with France and Portugal have been closed since the State of Alarm was introduced on March 15, with only a very limited number of people, such as cross border workers and lorry drivers, allowed to cross the frontier.