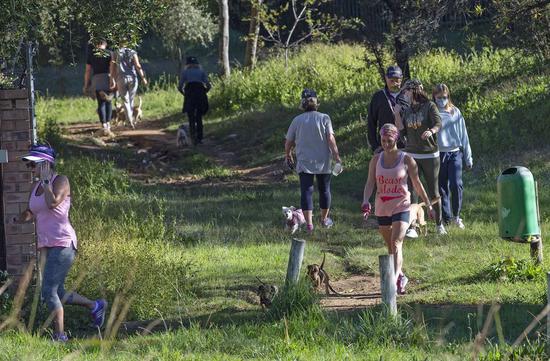 The COVID-19 pandemic continued unabated in South Africa, infecting 525 more people in the past 24 hours days after the easing of restrictions, Health Minister Zweli Mkhize has said.

With the newly-added cases, the country has a total of 9,420 confirmed cases, the minister said at a press briefing on Saturday after a visit to Cape Town and the Western Cape province, the country's epicenter of the pandemic.

The Western Cape recorded 4,809 cases as of Saturday, more than half of the national tally, Mkhize said.

He said eight more people died of the virus in the past 24 hours, with seven in the Western Cape and one in KwaZulu-Natal. One of the deceased was a health worker at the Tygerberg Hospital in Cape Town, a government-designated hospital for COVID-19 patients.

This brought the national death toll to 186.

Mkhize said the average mortality rate in the country was about two percent, which is "within the norm."

A driver of the high number of cases in the Western Cape is "cluster outbreaks", which refer to infections among people living or working in the same areas.

The province is seeing a lot of cluster outbreaks in factories and shops, said Mkhize.

The City of Cape Town in particular is a hotspot, he said.

About 93 percent of people who have died of COVID-19 in the province have at least one co-morbidity or another ailment, Mkhize said.

The high rate of infections in the Western Cape has prompted calls to restore level-five restrictions in high-risk areas.

The African National Congress (ANC) in the Western Cape has called for areas with the most COVID-19 infections in the province to be placed back under level-five lockdown restrictions.

The country reduced level-five restrictions to level-four on May 1, allowing the partial return of some businesses.

The approach going forward must ensure a differentiation in levels of lockdown, Mkhize said.

His remarks were seen as an indication that Cape Town and other high-risk areas might be placed back in level-five lockdown.

But Western Cape Premier Alan Winde said he and Mkhize did not discuss any plan to take province back to level five, the highest level of restrictions.

Winde, who accompanied Mkhize on the assessment tour, said the actual plan for the province was to resurrect the economy even more.

Winde said the province has also developed a plan on how to curb people moving, encourage social distancing and behavioral changes.

Mkhize said the country needs to focus on specific areas with a containment strategy.

To break the cycle, those who test positive need to be quarantined, or be removed from their communities until they are better, said Mkhize.

How to isolate people who are positive with COVID-19 remains a problem, he acknowledged.

The government is trying to find people who are positive but are asymptomatic.

So far only about five percent of the people infected with the virus in the country are hospitalized, while the majority of patients are allowed to be self-isolated at home. This makes it difficult to contain the spread of the virus.