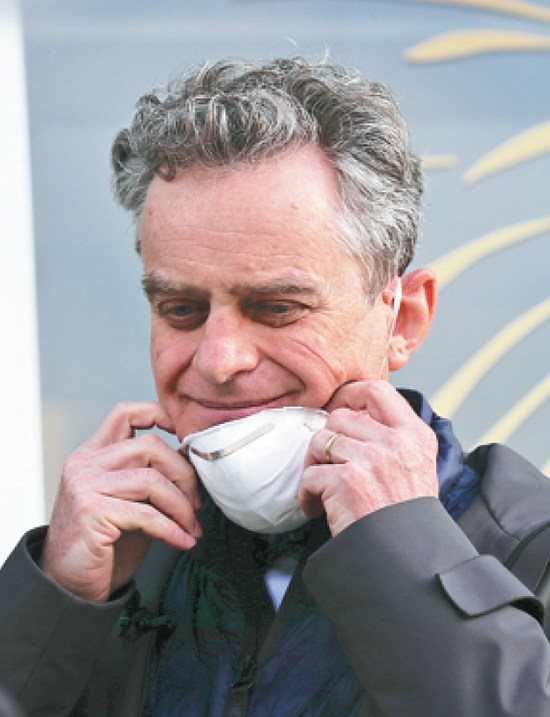 While most other diplomats in Wuhan have left the city following the outbreak of the novel coronavirus, Olivier Guyonvarch, consul general for France in Wuhan, decided to stay with his colleagues. His consulate is the only one in the city that remains open.

"Our friends are facing difficulties. We want to stay along," Guyonvarch said. "We were the first consulate in Wuhan, and there is a lot of deep cooperation between France and Wuhan. And for us, it was not an option to close the consulate."

Usually about 40 people work in the French consulate, opened in 1998. Now, four consulate staff volunteered to continue to work keeping in touch with French people living in Wuhan and taking care of relations between France and Hubei province, he said.

Some of the French staff had left Wuhan for vacation before the lockdown of the city, and some Chinese staff members have been unable to return because of traffic restrictions, he said.

"So we are still quite busy," he said. "Services of the consulate such as cultural and education sections have stopped."

Wuhan is the Central China city with the closest ties with France, and normally more than 500 French people live in the city. Following the lockdown, the consulate helped organize three flights that took more than 200 French people and their family members to France, he said.

He said the Chinese government is taking very strong measures to fight the disease, and he hopes the measures will fulfill their purpose.

Guyonvarch said he and his colleagues have been following regulations and advice from the local government for disease control and prevention, such as minimizing travel in the city. He said he has found that basic necessities like food and water are available.

"I really would like to express my support for the medical staff in Wuhan. They are heroes and are the first-line fighters against the disease," he said. The French government has provided protection materials such as masks to Wuhan, he said.

Many others in Wuhan, such as street cleaners and people working in the markets to sell food, also deserve gratitude for what they are doing, he said.

"They face risks because they face many people during the day," he said. "They are also very, very courageous. So everybody is trying to do his best to fight the disease."

Despite the difficulties Wuhan faces, the city will eventually recover, he said.

"During its long history, Wuhan has faced many difficulties. This time I think that we can be confident in the strength and the resilience of Wuhan's people to go through this very difficult time," he said. "But I also feel very, very sad for Wuhan because Wuhan has done a lot during the past 10 years in modernization and internationalization, and part of this great accomplishment has been destroyed by this disease.

"We hope that Wuhan will recover as quickly as possible. We will stay with Wuhan to help the city, and help the people get better and better through cooperation with friends."