China dispatches over 20,000 medics to aid anti-virus battle in Hubei 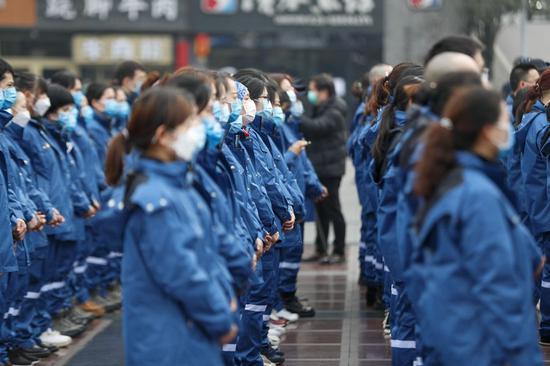 Medical team members from Chongqing are seen on a ceremony before leaving for Xiaogan City of Hubei Province, in southwest China's Chongqing, Feb. 11, 2020. (Photo by Huang Wei/Xinhua)

A total of 189 medical teams of 21,569 medical workers had been sent to central China's Hubei Province to help combat the coronavirus disease COVID-19 as of Wednesday, according to the National Health Commission (NHC).

To further support medical work in Hubei, more than 1,000 doctors, 1,681 nurses and 213 experts from 17 provincial-level regions including Tianjin, Hebei and Shanxi, were dispatched on Wednesday to 16 cities and prefectures other than the provincial capital city of Wuhan, such as Enshi and the Shennongjia forestry district, to assist with the local anti-epidemic fight.

Another 2,600 military medical staff were also sent to Wuhan on Thursday, Guo Yanhong, an official with the NHC, said at a press conference on Thursday in Beijing. She added that over 7,000 doctors and nurses are from intensive care departments, with the aim to effectively reduce mortality.

Three research teams led by academician Zhong Nanshan, Wang Chen and Li Lanjuan have joined the fight by providing consultations on the treatment of patients in critical condition and researching new drugs and therapies, Guo noted.

Three mobile P3 laboratories have been transported to Wuhan to help enhance the capability and efficiency of nucleic acid testing, Guo said.

"Treating patients is the top priority for epidemic prevention and control at present, in Hubei Province and Wuhan city in particular," Guo said. "We are gathering the strength of the whole nation and sending medical resources to the frontline, aiming to improve the admission and recovery rates, and reduce the infection and mortality rates."