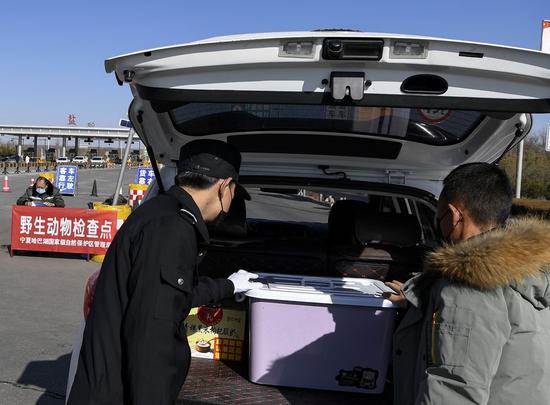 The spread of the novel coronavirus, preliminarily traced to a wildlife market in Wuhan, has thrust wildlife protection into the spotlight in China.

More Chinese have expressed support for sustained action against illegal wildlife trade or consumption. The country is using the public health emergency as a rare chance to boost public education and revamp the current wildlife protection system.

China has fast-tracked its legislation work related to wildlife. The top legislature will amend the law on the protection of wildlife this year and the amendment of laws on animal epidemic prevention and other areas will also be accelerated, an official said on Monday.

Wild animals protected by the law on the protection of wildlife, in force since 1989 and revised in 2016, refer to rare and endangered terrestrial and aquatic wild animals, as well as terrestrial wild animals of important ecological, scientific and social value.

After the sudden attack of the novel coronavirus, China has imposed a temporary ban on the trade of all wild animals across the country. The move almost immediately earned praise from international wildlife protection organizations.

No wildlife can be transported or sold in any markets or online across the country until the public health emergency is over, according to the ban issued on Jan. 26. A hotline, 12315, was opened for people to report violations.

Several ministries and bureaus have cooperated to launch a campaign to crack down on illegal activities involving wildlife. Police busting crimes involving wild animals have been aired on TV more frequently, sending signals of tougher law enforcement across the country.

Voices of the conservationists and animal welfare advocates have been amplified in leading state media, such as the People's Daily, Workers Daily, the Guangming Daily and China Central Television.

The guiding principles in amending the law on wildlife protection need a change, that is, public health safety should be written into the law, Zhou Ke, a law professor with Renmin University of China, told China Central Television.

A group of 19 academicians and professors from the Chinese Academy of Sciences and leading universities jointly issued a statement, calling for sustained action to end illegal trade and consumption of wild animals.

To reduce poaching and tackle the "outstanding problems in the protection, domestication, breeding and utilization" of wild animals, the forestry authority in 2003 listed 54 kinds of land wild animals which can be raised on farms, such as minks, civets and sika deer, as the domestication and breeding techniques are mature.

The joint statement by 19 academicians and professors pointed out there are loopholes in the management of the domestication and breeding farms: Some may do illegal purchases, sales and consumption of wild animals, under the cover of protection, domestication or breeding.

Voices defending the domestication and breeding farms are also heard.

Ran Jingcheng, head of the wildlife and forest plant management station in Guizhou Province, said farm-raised animals, such as sika deer and ostriches, should not be managed as wildlife. As long as the breeding technology is mature and the quarantine standards are well met, they can be raised as poultry and livestock to meet the market demand, Ran told Xinhua.

Some experts warned against a rush decision to bring out a permanent ban of wildlife trade, arguing that it will push wild animal trade to be further concealed, and thus even more difficult to trace.

As the novel coronavirus has changed almost everyone's life in China, more Chinese have broken their silence and called for sustained action against wildlife trade and consumption.

Almost immediately after the epidemic, a video of a woman eating a bat supposedly in Wuhan went viral online. However, the video was not set in Wuhan. It was made in Palau, a western Pacific island, about 2,100 km away from China.

It was a travel program made in 2016 to introduce local culture to the Chinese audience. The woman, who tagged herself as a vlogger on Weibo, explained the bat was not caught in the wild but was a fruit bat raised on a farm by locals.

But the video did help bring a revolutionary change: More Chinese turned into advocates for wild animals. They are filling social media with warnings on viruses hidden in bats and other wild animals, videos on suffering wildlife being poached and clips on the positives of wild animals in documentaries, such as pangolins.

An online poll shows nearly 97 percent "strongly" against eating wild animals, nearly 78 percent are against using wildlife products including fur, bone and medicine, and 77 percent were against the domestication of wildlife on farms. The real-time poll, launched by Peking University Center for Nature Society on Jan. 28, had attracted nearly 93,000 participants as of Wednesday noon.

A netizen said under the post of the poll on Weibo that "I hope all the people can learn a lesson. The price is too high. How much manpower, material resources and financial resources have been used? How many innocent lives have been lost? The government should also do something and strike hard!!