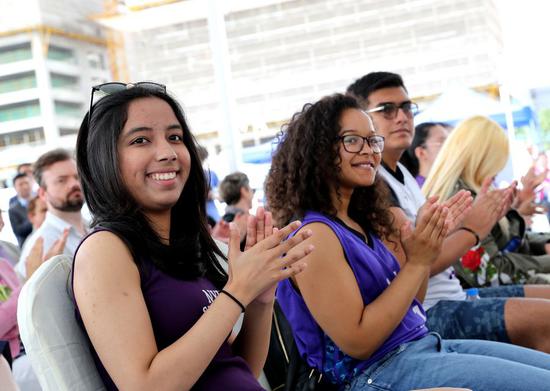 The number of new international students in the United States in the 2018/19 academic year declined by 0.9 percent, a slip for the third year in a row though not as steep as the nearly 7-percent drop the previous year.

The data was released on Monday by the Institute of International Education (IIE) and the U.S. Department of State's Bureau of Educational and Cultural Affairs (ECA).

Of those students, 872,214 were enrolled while another 223,085 were in Optional Practical Training (OPT) programs. Though the number of enrolled students was down for the third year, a soar in OPT participation led to the overall increase of international students of 0.05 percent when slightly rounded up, the report showed. The total number of international students enrolled in U.S. colleges fell by 2.1 percent in 2017/18.

For the 10th consecutive year, China remained the largest source of international students in the U.S. in 2018/19 with 369,548 students in undergraduate, graduate, non-degree, and OPT programs, a 1.7-percent increase from the previous year, said the report.

Over half of the international students, or 51.6 percent, pursued STEM fields of science, technology, engineering and mathematics in the 2018/19 academic year, the report said.

Up to 54.9 percent of U.S. students went to Europe in the 2017/18 academic year. Britain, Italy, Spain, France and Germany hosted the most U.S. study-abroad students.

"The record numbers of international students in the United States and U.S. students studying abroad mean that more students than ever before are being exposed to new ideas and ways of thinking," IIE President and CEO Allan Goodman said in a statement.

"International exchange makes our colleges and universities more dynamic for all students and an education at a U.S. institution can have a transformative effect for international students, just like study abroad experiences can for U.S. students," said Marie Royce, assistant secretary of state for educational and cultural affairs.

International students, making up 5.5 percent of the total U.S. higher education population, contributed 44.7 billion U.S. dollars to the country's economy in 2018, an increase of 5.5 percent from the previous year, according to the latest data from the U.S. Department of Commerce.

The IIE, founded in 1919, has published the annual Open Doors Report since late 1940s. It has been in partnership with the ECA since 1972.