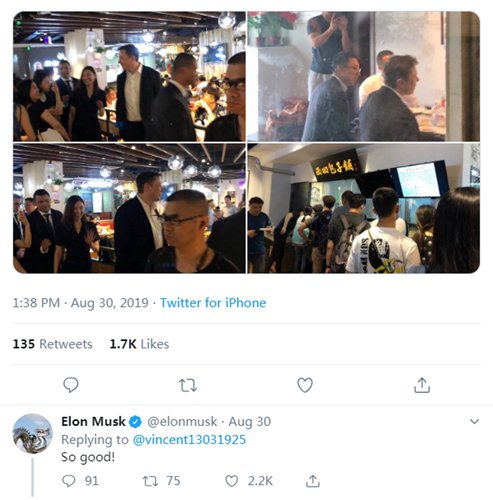 Some people may be surprised to find that a U.S. billionaire can be satisfied with a meal that only costs on average 27 yuan ($3.76).

Following his business trip in Shanghai for the 2019 World Artificial Intelligence Conference, Tesla CEO Elon Musk was seen visiting a popular local baozi (steamed buns with filling) restaurant in Beijing. A netizen posted photos on Friday of him walking into the crowded restaurant to have lunch on Twitter. Musk replied to the message and said "so good!"

This is not the first time that Musk has taken advantage of a business trip to have local Chinese food. In July 2018, photos of him eating jianbing guozi (pancake with crispy fried dough sheet), a popular street food that originated in Tianjin, in Shanghai were posted on social media. More recently, he was spotted having hot pot with his girlfriend in Beijing in January.