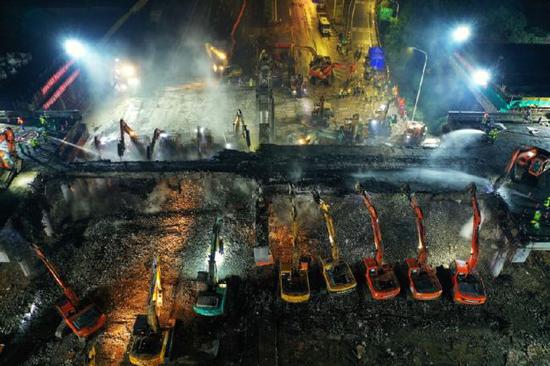 The construction site of the bridge demolishing work in Jiangyin section of the Beijing-Shanghai Expressway. (Photo: Xinhua)

Many foreign netizens expressed their astonishment of "China Speed" after Xinhua published a video showing a bridge being demolished and cleared up in only two and a half hours.

The video, posted on an overseas social media platform, shows a 50-meter long bridge on the Beijing-Shanghai Expressway being demolished overnight.

The Jiangyin section of the expressway was closed at 10 pm on May 25. Later, 50 pieces of large equipment gathered at the construction site. Only two and a half hours later, the whole bridge was demolished and all residues were cleared up before 6 am. In the early morning of the next day, the road was open to traffic again.

Many local residents cried: "It seems nothing has happened overnight. Just a bridge has disappeared." 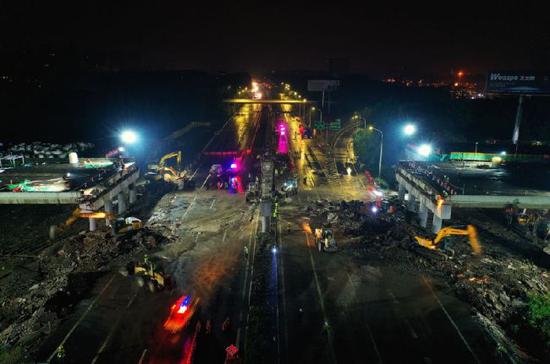 The construction site of the bridge demolishing work in Jiangyin section of the Beijing-Shanghai Expressway. (Photo: Xinhua)

Another netizen replied: "There is a speed standard for infrastructure called China Speed. No matter you like China or not, the fact is most people agree that China is No.1 in infrastructure around the world and is a so-called 'Infrastructure Monster'."

Other netizens made comments on their own country's construction speed. One netizen from India said: "In the case of India, no need for demolishing like this, we will use the bridge until it collapses by default with many casualties." One netizen from the United States wrote: "The same thing will take 2.5 weeks in America. After it's done there will be donut bags and coffee cups littered everywhere."