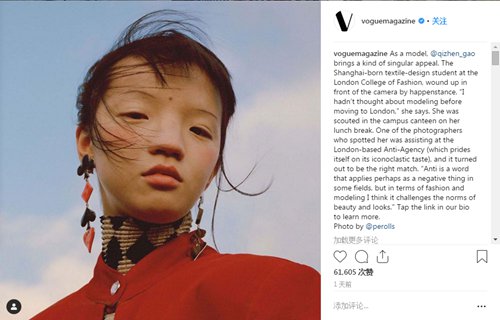 U.S. fashion magazine Vogue's post of a Chinese model on Instagram got slammed by some Chinese netizens, who claimed the magazine is denigrating the Asian model. However, others called for understanding and to respect diversity.

The picture of Chinese model Gao Qizhen, who is a textile-design student at the London College of Fashion in the UK, released on Sunday, features her small eyes, fine eyebrows with a mole in the middle and a flat nose, which has sparked controversy on social media.

Some Chinese netizens criticized Vogue for denigrating Asians, and some even claimed its racism. "I feel offended by the Vogue's aesthetics," wrote a netizen, questioning why fashion brands always promote the stereotype of Asians (small eyes, pie-shaped face) while picking (generally recognized) beautiful or handsome faces of Westerners.

"I personally am kind of done with 'unusual' beauty. It's all gone a bit too far into disturbing territory now. Interesting? Yes. Beautiful? No. Bring back the classic beauties, please. They exist in all races," wrote another.

Challenged by online accusations, a Beijing-based Vogue employee surnamed Zhu told the Global Times on Monday that "Vogue probably intended to highlight the oriental features by using the model. But I personally think it is a spread on Chinese culture, as her makeup is quite in the Chinese style."

While a flood of accusations came from Asian netizens, other voices urged the society to be more tolerant of different fashion styles.

The incident shows that "beauty" is becoming more diverse and is no longer a one-size-fits-all aesthetic, popular Chinese fashion blogger MissCharmingDaxiaojie told the Global Times on Monday.

"In the age of plastic surgery, which brought sameness beauty standards to the public, it is important to encourage everyone to stop 'body-shaming', and to accept ourselves as who we are and appreciate our beauty, the value that the fashion field is advocating," she said.

Gao was assisting at the London-based Anti-Agency which prides itself on its iconoclastic taste. "'Anti' is a word that applies as a negative thing in some fields, but in terms of fashion and modeling I think it challenges the norms of beauty and looks," Gao was quoted by Vogue as saying in February.