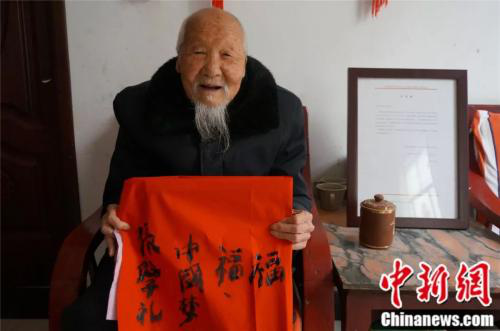 Zhang Xueli, 117, is a native of Jiaxian county, Central China's Henan province. He was born in late Qing Dynasty (1644-1911), the last imperial dynasty of China.

Zhang said he attended a private school at an early age, where he learned Chinese classics including the Three Character Classic (San Zi Jing), Classic of Poetry (Shi Jing) and The Analects, as well as how to write Chinese calligraphy.

At 117, Zhang can still take care of himself, walk with the help of a cane, and speak clearly.

Zhang Xueli leads a regular life -- he gets up around 7 am. During the day, Zhang talks with family members, watches TV and takes a short nap in the morning and one in the afternoon. Tea is his favorite drink and he never consumes alcohol or smokes cigarettes.

"My father is good-tempered and open-minded," said his youngest daughter Zhang Yuan.

Zhang Xueli has three daughters, the oldest being 89, and the youngest 73.

Zhang Yuan said her father is always willing to lend a helping hand to those in need and never quarrels with anyone in the village.

Despite his decline in memory, Zhang can still chant the Three Character Classic, a popular text for elementary education in ancient China.

"Probably because he has been following the teachings of the book all his life," said Zhang Yuan.

Jiaxian county is known as the "home of longevity" of China. At present, there are 62 centenarians living in the county.