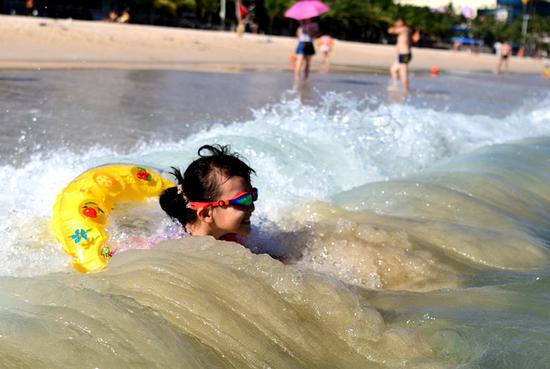 A child enjoys a cool moment in the ocean waves at a scenic zone in Sanya, Hainan Province. (Photo/ China Daily)

A new analysis found the year of 2018 was the fourth warmest year on Earth since 1850.

Temperatures in 2018 were around 1.16 degrees above the average temperature of the late 19th century, from 1850 to 1900, a period often used as a pre-industrial baseline for global temperature targets, according to the research of scientists at Berkeley Earth, a California-based research organization.

Only 2016, 2017 and 2015 were warmer than 2018 with only small differences among them. The year 2016 remained the warmest year in the period of historical observations.

Though 2018 ranked fourth overall, 2015 through 2018 still stood out as a period of significant warmth well above all previous years since 1850, said the report, adding this reflects the long-term trend towards global warming.

Although 2018 was slightly cooler than the immediately preceding years, its temperature remained consistent with the long-term warming trend.

According to the report, besides long-term warming, individual years were also affected by interannual variations in weather, such as El Nino and La Nina.