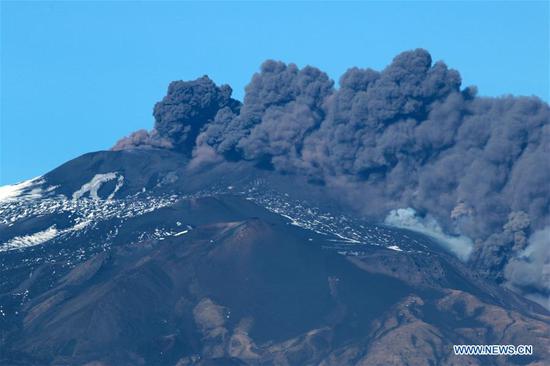 Sicily's Mount Etna volcano erupted on Monday, the National Institute of Geophysics and Vulcanology (INGV) said in a statement.

The eruption that began at noon was preceded by 130 earthquake tremors, the two strongest of which measured 4.0 and 3.9 on the Richter scale, the INGV said.

Air traffic at the airport in the nearby city of Catania was suspended as a result, SKY TG24 private broadcaster reported.

"Earthquake felt by the population, no injured or damages so far," the Civil Protection Agency tweeted around 1 pm.

Local media including RAI public broadcaster and La Repubblica newspaper posted photos of a massive cloud of ash spewing from Mt Etna, which is one of the world's most active volcanoes, according to the U.S. Geological Survey.

Eruptions are fairly frequent occurrences at Mount Etna, with the last large eruption taking place in 2009, according to the INGV.