'Striving' chosen as Chinese character of 2018 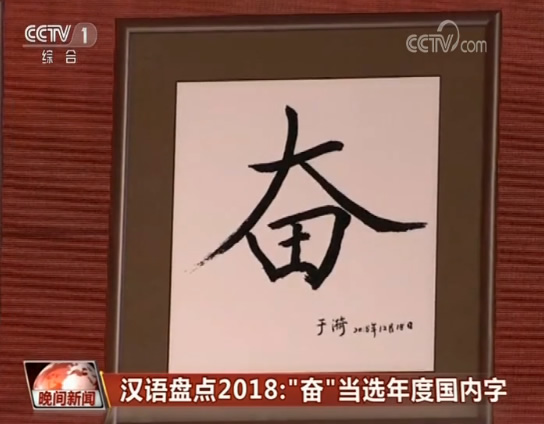 "Striving" is chosen as the Chinese Character of the Year 2018. (Photo/Screenshot on CCTV)

"Striving" and "the 40th anniversary of reform and opening-up" have been respectively chosen as the Chinese Character and Word of the Year 2018 in China, according to a survey released Thursday.

The survey also chose "exit" and "trade friction" as the international Chinese Character and Word of the Year respectively for 2018.

The winning characters and words were chosen from several thousand recommendations and based on hundreds of thousands of votes by netizens.

Since the launch of the campaign, the top 10 new words, buzzwords, and cyber words of the year have also been unveiled, among which "harvest festival for Chinese farmers," "China International Import Expo" and "a community with a shared future for humanity" were listed.

Experts said that these characters and words reflect the society and times, epitomize what transpired in China and the world over the past year, and embody the people's desire for better lives.

The Character and Word of the Year are now in its 13th year. This year's survey was conducted by the Chinese National Language Monitoring and Research Center and internet companies including Tencent and Sogou and database Gsdata.