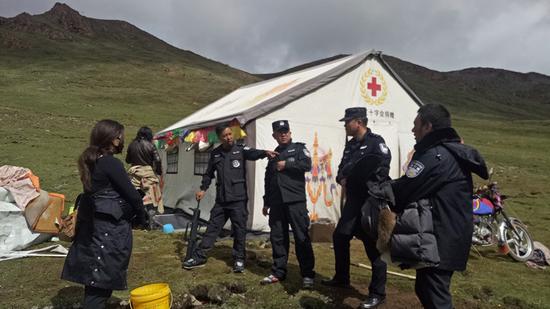 Four national-level nature reserves have launched their annual campaign against poaching, illegal tree cutting and other banned activities in an ongoing effort to protect natural resources and biodiversity.

The joint action includes reserves at Sanjiangyuan and Hoh Xil in Qinghai province, the Altun Mountain in the Xinjiang Uygur autonomous region and Chang Tang in the Tibet autonomous region.

"Every summer we receive frequent reports of illegal hunting, deforestation and trespassing, which pose a great threat to rare animals and plants," said Kong Linzhi, head of forestry public security for Sanjiangyuan National Park, which includes the Sanjiangyuan and Hoh Xil reserves.

He said the campaign, which started on Wednesday, will run for nine days and focus on areas such as the headwaters of the Yangtze, Yellow and Lancang rivers.

About 30 officers from Kong's security department and dozens of environmental inspectors will be involved in the campaign, he said.

The team will be divided into two groups－one to patrol the Qinghai-Tibet Highway and another to patrol a route between Golmud and Taiyang Lake in Qinghai. The two routes add up to about 5,000 kilometers, he said.

The four reserves together cover 543,000 square kilometers and account for 58 percent of China's total nature reserve area. They are home to rare wildlife such as Tibetan antelope, wild yaks and donkeys.

"As more tourists visit these areas, we've seen an increase in illegal human activity, which has triggered concern about our wildlife protection work," said Li Yongpeng, a forestry officer for Sanjiangyuan.

He said one of the major tasks of the campaign is to punish tourists who break the rules and stop those who might pose a threat to wildlife.

The reserves began cooperating 2010, with regular information exchanges and professional training. They have also built a platform for sharing data on rare wildlife and biodiversity.

In addition to the annual campaign, the nature reserves have conducted special patrols in recent years.

Early this month, a team was sent on a one-month mission to escort pregnant Tibetan antelope on their migration covering hundreds of kilometers from Qinghai to Tibet to give birth.