China to explore habitable planets outside the solar system around 2030: CASC 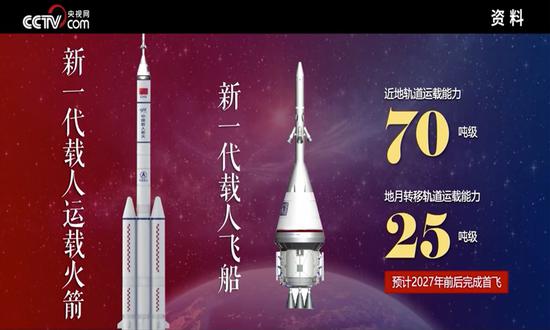 China has outlined a fresh batch of ambitious plans for deep-space exploration, a lunar probe mission, and next-generation launch vehicles as the country is on track to become an all-round world space power by 2045. The plans include the maiden flight of the next-generation manned carrier rocket planned around 2027, exploration for habitable planets outside the solar system around 2030, and the basic structure of the International Lunar Research Station to be built by 2028.

Wu Yansheng, chairman of state-owned space giant China Aerospace Science and Technology Corp (CASC), disclosed that China plans to launch a deep-space probe around 2025 to explore near-Earth asteroids and main-belt comets, and to implement a Mars sample retrieval mission in the next 10 to 15 years.

China also plans to conduct interplanetary surveys of Jupiter and Uranus, as well as the solar system and its frontiers, Wu said. By 2030, a mission called "searching for voices" will be implemented to explore whether there are planets outside the solar system suitable for human habitation.

According to the CASC, China is also developing a next-generation manned launch vehicle that will meet the long-term strategic need for manned lunar exploration. It will be a three-and-a-half stage launcher that's 90 meters high and 5 meters in diameter, and weighs some 2,187 tons at launch.

It will be capable of sending payloads of 25 tons directly into Lunar Transfer Orbit (LTO), or payloads of 70 tons into near-Earth orbit, and it's expected to make a maiden flight by 2027, the CASC previously revealed to the Global Times.

A new model of super heavy-lift carrier rocket - the Long March-9 - is also under development. It will be a 10-meter-diameter, three-stage mega rocket with a height of 110 meters, capable of sending payloads of 150 tons into near-Earth orbit, 50 tons into LTO and 35 tons to the Mars Transfer Rocket. The first flight of the Long March-9 vehicle could be expected around 2030.

Wu also shared the latest progress in China's Phase-4 lunar probe mission. The Chang'e-6 probe, which has served as a back-up for the Chang'e-5 with a sample retrieval capability, will travel to the far side of the moon by around 2025.

Chang'e-7 is slated to carry out environmental and resource surveys of the lunar South Pole around 2026.

Joining the Chang'e-7, Chang'e-8 will be launched around 2028 to form a basic structure for the International Lunar Research Station.

China is also constructing a "lunar internet" integrating data relay, navigation and remote-sensing functions, with the hope that future astronauts, space engineers and scientists sent to the lunar research station can use the internet to post on social media just as they do on Earth.

The country is also eyeing reusable spacecraft that will shuttle between the Earth and space with low costs, high reliability and flexibility. The space shuttle will be just like high-speed railways and airplanes that operate on a regular basis.

To support this plan, a space infrastructure system will be established, so that spacecraft can realize in-orbit equipment replacement, maintenance and upgrades.