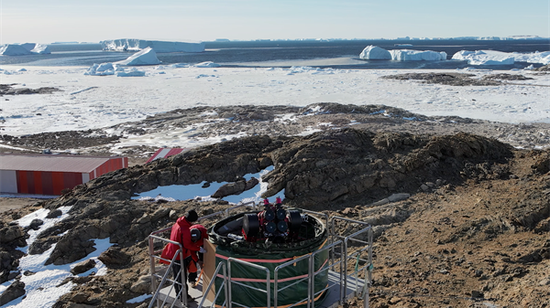 A Chinese telescope array mounted in Antarctica has started operation to observe exoplanets or Earth-like planets. (Photo/Chinese Academy of Sciences)

A small Chinese telescope array mounted in Antarctica has started operation to observe exoplanets or Earth-like planets, according to a news release by the Chinese Academy of Sciences (CAS) on Wednesday.

The facility, consisting of four optical telescopes and a near-infrared one, has been installed at China's Zhongshan Station during the country's 38th Antarctic scientific expedition.

The Xuelong and Xuelong-2, China's two polar icebreakers, set off for the expedition last November from Shanghai and returned in April.

The telescope array is set on an equatorial mount, and the aperture of the four telescopes in the optical band is 150 mm and the near-infrared one 200 mm, according to CAS.

Antarctica is believed to be an advantageous site for astronomical surveys. China has already installed two Antarctic survey telescopes, the AST3-1 and AST3-2, on the Antarctic continent.