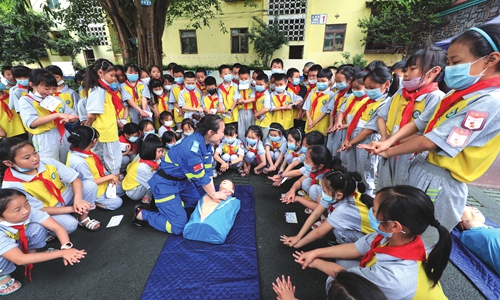 China has stepped up its efforts to establish a nationwide project for earthquake alerts and plans to build over 15,000 monitoring stations in five years, which could report even distant earthquakes in 5-10 seconds, experts from the China Earthquake Administration revealed.

On Wednesday, which marked the International Day for disaster reduction, the administration disclosed that China has developed technologies for earthquake early warning systems and has hastened its progress in building a project for rapid reporting and early warning functions.

Ma Qiang, a researcher from the Institute of Engineering Mechanics under the administration, said that a real-time monitoring system that can capture seismic signals as soon as possible and provide early warnings is being rolled out across the country. The warning will be released through mobile phones, TV, radio and new media.

China's high-speed railway network has built seismic monitoring stations covering a total length of about 13,000 kilometers of railway lines, with an overall coverage of nearly 40 percent, the researcher said.

China will build 15,000 stations with a distance of 10 to 15 kilometers in key areas such as in North China, the South-North seismic belt, southeast coastal areas, the middle section of Tianshan Mountain in Northwest China's Xinjiang Uygur Autonomous Region and Lhasa in Southwest China's Tibet Autonomous Region. The project started in 2018 and is expected to be accomplished in five years.

The stations will be installed with observation systems, communication networks, data processing and emergency earthquake information service systems. According to the different circumstances of the occurrence of destructive major earthquakes, they will be capable of in-situ warning, disastrous earthquake warning, cautionary earthquake warning and far-earthquake warnings within 5-10 seconds.

The administration said that from 2019 to July 2020, a total of 10 earthquakes of magnitude 5 or above have occurred in Southwest China's Sichuan Province, and the earthquake early warning system has proven effective.

In June 2019, an early warning system provided residents in Sichuan with life-saving time to prepare for an earthquake that killed at least 13 people and injured 199.

Chinese media reported that China is the third country after Japan and Mexico to boast such an advanced level of earthquake warning ability. The system covers 31 provinces and municipalities and has issued 40 earthquake warnings via television, cellphone, broadcasts and other channels. There have been no false alarms so far.

The warning system was developed by Wang Tun, head of the Institute of Care-life, a key earthquake early warning laboratory in Chengdu, in the wake of the devastating 2008 Wenchuan earthquake, which claimed more than 69,000 lives.

Wang claimed that it is the world's largest earthquake early warning system, covering 2.2 million square kilometers in China and 90 percent of the population in earthquake-prone areas.