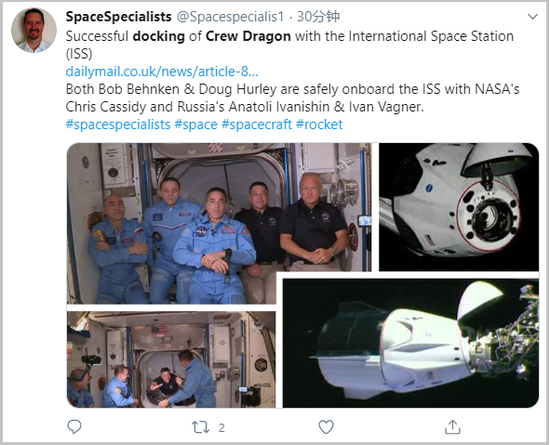 A screengrab from SpaceSpecialists' Twitter account on May 31, 2020, shows the photos illustrating the moments of the "successful docking of (the) Crew Dragon with the International Space Station (ISS)" on Sunday. (Xinhua)

SpaceX has completed the first part of its historic crewed flight to the International Space Station (ISS) Sunday morning, when its Crew Dragon spacecraft successfully docked with the orbiting laboratory.

The docking was a delicate and dangerous part of the mission. The spacecraft performed a series of phasing maneuvers to position itself for rendezvous and docking with the ISS.

The two astronauts onboard worked with SpaceX mission control to verify that the spacecraft was performing as intended by testing the environmental control system, the displays and control system, and maneuvering the thrusters, among other things. 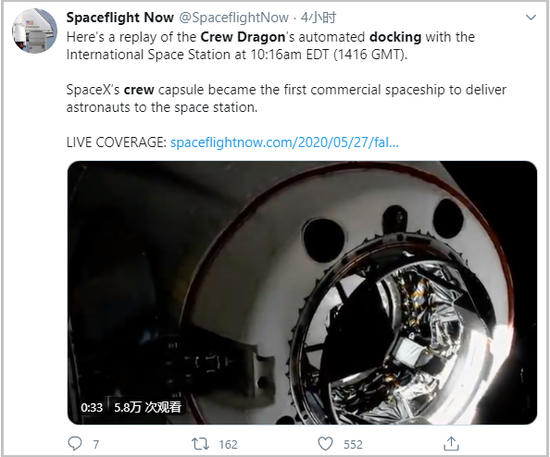 A screengrab from Spaceflight Now's Twitter account on May 31, 2020, shows a frame of the replay of "the Crew Dragon's automated docking with the International Space Station at 10:16 a.m. EDT (1416 GMT)" on Sunday. (Xinhua)

"It's been a real honor to be a small part of this nine-year endeavor since the last time a United States spaceship docked with the International Space Station," Hurley said after docking completed.

"We have to congratulate the men and women of SpaceX, at Hawthorne McGregor and at Kennedy Space Center. Their incredible efforts over the last several years to make this possible can not go overstated," the astronaut added.

Before opening the hatch and entering the station, Behnken and Hurley conducted a series of pressure and leak checks to ensure their safety. The hatch opened at 1:02 p.m. Eastern Time.

"They made it. After launching from @NASAKennedy on the @SpaceX Dragon Endeavour spacecraft yesterday, @AstroBehnken and @Astro_Doug have officially joined the @Space_Station crew today at 1:02pm ET - making history in the process." NASA tweeted.

The two astronauts entered the ISS at 1:22 p.m. Eastern Time. They joined fellow NASA astronaut Chris Cassidy and two Russian cosmonauts aboard the station, becoming members of the Expedition 63 crew.

Behnken and Hurley will perform tests on Crew Dragon in addition to conducting research and other tasks with the space station crew.

Their docking came after the astronauts spent about 19 hours inside Crew Dragon orbiting around Earth, following Saturday's launch. 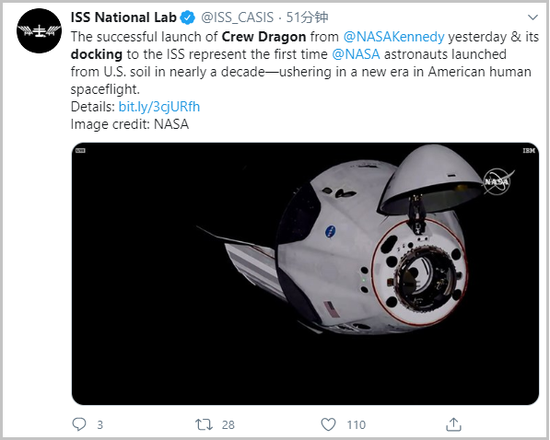 A screengrab from ISS National Lab's Twitter account on May 31, 2020, shows a photo of the Crew Dragon's "docking to the ISS (International Space Station)" on Sunday. (Xinhua)

The Crew Dragon spacecraft lifted off on a SpaceX Falcon 9 rocket on Saturday from Launch Complex 39A at the Kennedy Space Center in Florida.

After reaching orbit, Behnken and Hurley announced that they had named their capsule Endeavour.

This is SpaceX's final test flight for NASA's Commercial Crew Program and will provide critical data on the performance of the Falcon 9 rocket, Crew Dragon spacecraft, and ground systems, as well as in-orbit, docking and landing operations.

The mission's duration has not been announced. NASA said it will be determined based on the readiness of the next commercial crew launch.