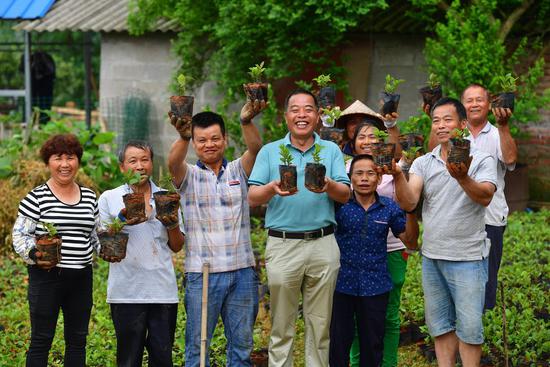 An article by Chinese President Xi Jinping on strengthening areas of weakness in building a moderately prosperous society in all respects will be published Monday.

The article by Xi, also general secretary of the Communist Party of China (CPC) Central Committee and chairman of the Central Military Commission, will be published in the 11th issue of the Qiushi Journal.

Since the 18th CPC National Congress, with efforts focused on people's aspirations to live a better life, the CPC has overcome difficulties to forge ahead, making historic achievements in building a moderately prosperous society in all respects, says the article.

The results have been even better than expected, it says.

Noting that there are still some areas of weakness in building a moderately prosperous society in all respects that need to be strengthened with prompt efforts, the article calls for targeted measures to do away with the weak links.

Criterion for a moderately prosperous society in all respects should include not only quantitative indicators but also careful assessment of people's actual living standards and sense of fulfillment, according to the article.

Stressing the need to identify and take stock of the prominent weaknesses and tasks that must be completed, the article emphasizes the focus for fixing weak links should be on the poor people who are old, weak, ill and disabled, regions of extreme poverty, and areas such as environmental protection, public services and infrastructure where weaknesses are prominent.

The article points out the main tasks to fix the weaknesses, including fully accomplishing the task of eradicating poverty, solving prominent problems concerning environmental pollution in major areas, advancing the work on people's wellbeing and improving social security mechanisms.

"Building a moderately prosperous society in all respects involves a wide range of issues, however, strengthening areas of weakness is a task that must be fulfilled," the article says.

Party committees and governments at all levels must earnestly perform their responsibilities, the article says, urging officials and cadres at all levels to focus on the goal and achieve it with concrete actions while uniting and leading the people to work hard.