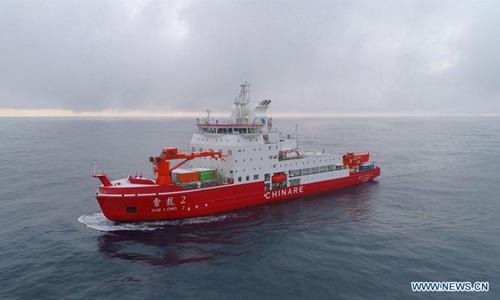 China's 36th Antarctic expedition team conducted the first survey of benthic organisms using the large-scale benthic trawl in the Cosmonauts Sea on Sunday,showcasing the country's efforts to protect the global ecosystem and to fulfill its strategic role in saving life on earth, experts said.

This survey is an important part of the team's attempts to explore the marine ecosystem in the Cosmonauts Sea. The marine ecology survey covers marine plankton, nekton, benthic organisms, birds and mammals, the Xinhua News Agency reported.

Benthic organisms are those that live near the bottom of a body of water.

The study of Antarctic biotic populations could help prevent some species from becoming endangered amid a warming climate and rampant pollution, Lu Baorong, a biology professor at Fudan University in Shanghai, told the Global Times.

Changes in those marine organisms in Antarctic could have a butterfly effect on the global ecology, and China takes over the leading role in species protection in the polar area using advanced deep-sea research techniques and increasing financial investment, said Li Junsheng, a deputy director of the research center for eco-environmental science at the Chinese Research Academy of Environmental Sciences in Beijing.

He Jianfeng, the chief scientist of the expedition, said the food webs and biodiversity of the Cosmonauts Sea had long been unknown. Conducting marine ecological surveys there will help further enhance people's understanding of the Antarctic marine ecosystem, so as to better protect and utilize the Antarctic.

Since the start of the expedition in the Cosmonaut Sea in December 2019, the team has used tools, including water pickers, plankton vertical nets, krill trawls and mid-water fish trawls, to obtain biological samples at different water layers.

This is to specifically explore the species composition, spatial and temporal distribution, biodiversity and other data.

"Antarctica, the North Pole, Mount Everest and the deep ocean are rare areas of human activity. The survey of benthic organisms is likely to help us dig up new marine species and improve our understanding of the rules of global ecosystems by learning how they survive in extreme environments," Li told the Global Times.

At the same time, the expedition team acquired the species, number and distribution of birds and mammals by observing them throughout the whole voyage.

The 413-member team, containing two ice breakers - Xuelong and the homemade Xuelong 2 - set sail from Shanghai on October 22, 2019. It aims to grasp the influence of the Antarctic on changes in the world, and to improve China's capability to cope with climate change and increase participation in Antarctic global governance, according to Xinhua.