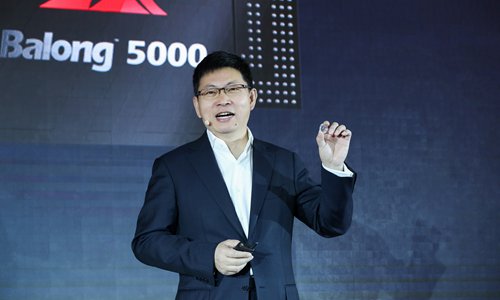 The chipset, called Tiangang, will support simplified 5G networks and large-scale network deployment around the world, Ryan Ding, the company's executive director of the board and CEO carrier business group, said at a launch event in Huawei's R&D center in Beijing.

The company has now secured 30 5G commercial contracts, over 50 percent of which are in Europe.

The new chipset is claimed to be the first of its kind in 5G industry, with major breakthroughs in integration, computing power and spectral bandwidth, which can be deployed in just half the time it took to install a 4G station. These features will help lower the network deployment costs.

Although some Western countries, which are also allies of the U.S., have been blocking Huawei from participating in 5G construction and deployment for national security reasons, a large part of its commercial contracts have been secured in Europe.

The company also launched its first 5G Modem named Balong 5000, which is claimed to the most powerful single-chip that supports different architectures.

The U.S. government has been putting increased pressure on its political allies, including the UK, Germany and Japan, to exclude China's Huawei from their 5G networks since 2018.