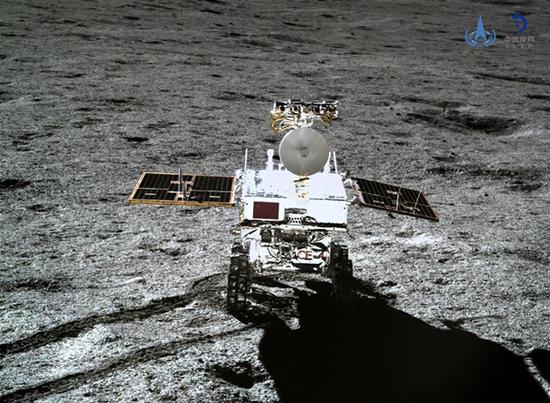 Photo taken by the lander of the Chang'e-4 probe on Jan. 11, 2019 shows the rover Yutu-2 (Jade Rabbit-2). China announced Friday that the Chang'e-4 mission, which realized the first-ever soft-landing on the far side of the moon, was a complete success. With the assistance of the relay satellite Queqiao (Magpie Bridge), the rover Yutu-2 (Jade Rabbit-2) and the lander of the Chang'e-4 probe took photos of each other. (Xinhua/China National Space Administration)

China announced Friday that the Chang'e-4 mission, which realized the first-ever soft-landing on the far side of the moon, was a complete success.

With the assistance of the relay satellite Queqiao (Magpie Bridge), the rover Yutu-2 (Jade Rabbit-2) and the lander of the Chang'e-4 probe took photos of each other.

The scientific instruments aboard the probe worked well, and the images taken by the probe and detection data have been sent back to ground control, said the China National Space Administration (CNSA).

At 4:47 p.m. Beijing Time on Friday, the images of the lander and rover appeared on a large screen at the Beijing Aerospace Control Center, showing the Chinese national flag on both the lander and the rover with landscape dotted with craters in the background.

A congratulatory message sent by the Communist Party of China (CPC) Central Committee, the State Council and the Central Military Commission hailed the Chang'e-4 mission as a remarkable achievement in China's space program, which marks an important stride toward China being a strong country in space exploration.

The Chang'e-4 probe touched down on the Von Karman Crater in the South Pole-Aitken (SPA) Basin on the far side of the moon on Jan. 3, with the rover driving onto the lunar surface late that night.

The lander, the rover and the relay satellite are in good condition. After the lander and the rover photograph each other, the probe will start scientific detection, the CNSA said.

Named after Chinese moon goddess "Chang'e," China's lunar exploration program, which began in 2004, includes orbiting and landing on the moon and bringing samples back to Earth.

One of the images published by CNSA earlier on Friday is a 360-degree panorama, which was pieced together from 80 photos taken by a camera on the lander.

"From the panorama, we could see the probe was surrounded by many small craters. It was really thrilling," said Li Chunlai, deputy director of the National Astronomical Observatories of China and commander-in-chief of the ground application system of Chang'e-4.

"The rugged terrain will pose great challenges for planning the route of the rover," Li said.

"Compared with the landing site of the Chang'e-3, which was sent to the Sinus Iridum, or the Bay of Rainbows, on the moon's near side, fewer rocks can be found in the area surrounding Chang'e-4, indicating the landing area of Chang'e-4 might be older."

The CNSA also released a video of the landing process of the Chang'e-4, which was produced by processing more than 4,700 pictures taken by a camera on the probe.

The video, lasting about 12 minutes, showed that the probe adjusted its altitude, hovered and avoided obstacles during the descent.

As a result of the tidal locking effect, the moon's revolution cycle is the same as its rotation cycle, and it always faces Earth with the same side.

Many lunar orbiters had shown that the moon's two sides are very different: the near side is relatively flat, while the far side is thickly dotted with impact craters.

"The far side of the moon has unique features, and has never been explored on site, so Chang'e-4 might bring us breakthrough findings," said Zou Yongliao, director of the lunar and deep space exploration division of the Chinese Academy of Sciences.

The scientific tasks of the Chang'e-4 mission include low-frequency radio astronomical observation, surveying the terrain and landforms, detecting the mineral composition and shallow lunar surface structure, and measuring neutron radiation and neutral atoms.

The radioisotope heat source, a collaboration between Chinese and Russian scientists, will support the probe through the lunar night, when the temperature falls to about minus 180 degrees Celsius.

The ground station that China built in Argentina has played an important role in the monitoring and control of the mission, and ground stations run by the European Space Agency will also offer support.

The scientists of the Lunar Reconnaissance Orbiter of NASA have also cooperated with Chang'e-4 mission team to study the landing of the Chang'e-4 probe, according to the CNSA.

China is becoming a major player in lunar exploration and contributing to scientific discovery.

The next step of its lunar program is to launch the Chang'e-5 probe to collect 2 kg of samples and bring them back to Earth.

As China's moon exploration progresses, its space experts are considering going deeper into the solar system -- to Mars, asteroids and Jupiter -- as well as a manned lunar mission.

China plans to launch a probe in 2020 that will orbit, land and rove on Mars the following year.

"Exploring the unknown is human nature. The moon is a mysterious world to us. We have a responsibility to explore and to understand it. Exploration of the moon will also deepen our understanding of Earth and ourselves," Wu said.