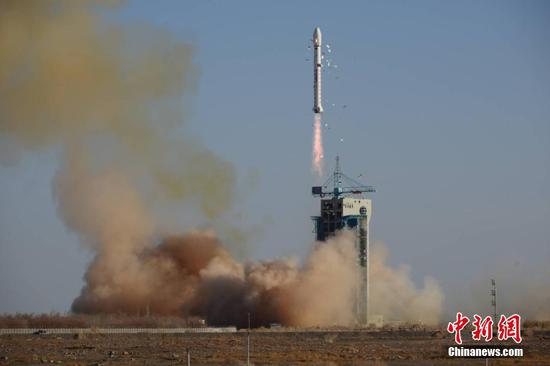 They were launched by a Long March-2D rocket from the Jiuquan Satellite Launch Center in northwest China at 4:00 p.m.

The test satellite, the first for the constellation Hongyan, meaning "swan goose" in Chinese, will be used to verify the function of mobile communications in low earth orbit (LEO).

The constellation, designed to comprise hundreds of LEO satellites and a global data processing center, was developed by Aerospace Dongfanghong Development Ltd. Shenzhen, a company under the China Academy of Space Technology (CAST).

After completion, the constellation will provide communication services for intelligent terminals across the world, Internet of Things and mobile broadcast. It can also help enhance navigation, monitor flights and sailing conditions and offer access to broadband Internet.

The constellation can help realize all-time and all-weather communications under any complex terrain conditions, according to CAST.

The upper stage Yuanzheng-3, or Expedition-3, atop the rocket, also contributed to the success of the mission.

Upper stages are independent spacecraft installed on the carrier rocket that are capable of restarting their engines multiple times in space to allow them to send different payloads into varying orbits. They are also referred to as space shuttles.

Saturday's launch was the 297th mission of the Long March rocket series.