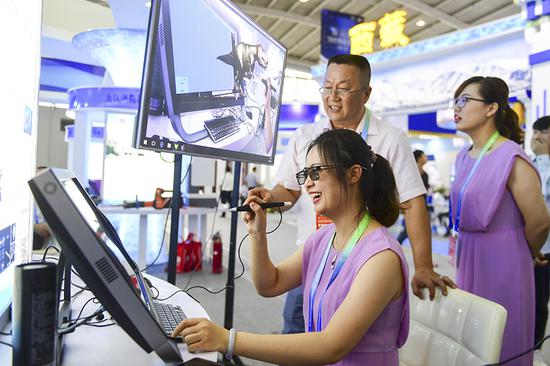 Wang Lili felt she had entered a human body by wearing a pair of glasses.

"It's amazing. I did not expect VR would help with my studies," she said.

The software was created by Kmax, a technology company based in Nanchang, Jiangxi province, that specializes in virtual and augmented reality.

Other teaching software made by the company covers astronomy, botany, geosciences, microbiology and zoology.

With wearable screens and wired gloves, VR/AR software has enabled students to interact with virtual environments, for an experience much richer than that provided by traditional teaching.

Bringing VR into education has become reality. At Sichuan University in Sichuan province, atoms and molecules have been displayed to students in a smart teaching environment.

With mixed reality technology, or MR, students can not only see images of chemical structures but also stretch and distort them with their fingers by touching the screen.

"In a simulated and interactive environment, students are able to communicate with knowledge," she said.

Chen Lijiang, a primary school teacher and visitor of the fair, said technology is about to change traditional modes of teaching.