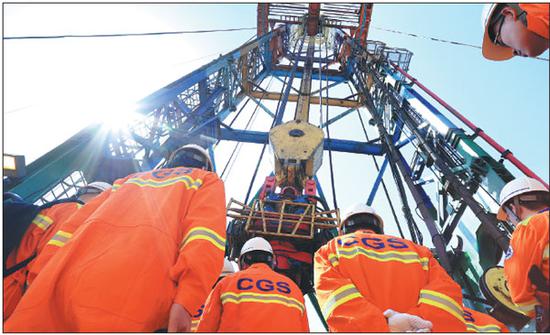 Researchers plan to develop a drilling rig capable of boring a hole 15,000 meters deep, following up on the success of a domestically developed rig that reached 7,018 meters last month.

The development of the new rig will be based on knowledge gained from the Crust-1 10K ultradeep scientific rig, currently the best China has developed, said Sun Youhong, vice-president of Jilin University and the research and development director of the deep continental scientific drilling equipment program.

Crust-1, which was designed to bore 10,000 meters into the earth, showed its capability in Anda, Heilongjiang province, on May 26, when it penetrated the Cretaceous continental strata and drilled the deepest borehole for scientific purposes completed by an Asian country.

For example, temperatures will reach 400 C at a depth of 13,000 meters, while they are about 175 C at 7,000 meters, he said. Higher stress in the crust means some of the rocks are more likely to crack and result in drilling mishaps.

Such problems are cutting-edge, and there is no mature technology and experience that can be used for reference, he said.

A deep borehole drilled by the future rig could be used as "a permanent underground observation station", he said.

Equipment at such a station could enable scientists to make "dynamic observations" of the earth, instead of the current static ones, and "greatly improve our ability to warn of major natural disasters early", he said.

Zhao Yan, a researcher on the Jilin University team, said that an initial design has been completed and awaits approval.

Zhao said they are also considering possible sites to drill a 13,000-meter borehole. Nine candidate sites include volcanic areas of Changbai Mountain and Tarim Basin in the Xinjiang Uygur autonomous region, which has huge potential as a source of oil and natural gas.

Last month's successful Songke 2 project, which drilled to a depth of 7,018 meters, made China the third country to develop a rig capable of hitting 10,000-meters, after Germany and Russia.

Research into Crust-1, which started in April 2009, is being led by Jilin University in cooperation with several other institutes, including two under the China Geological Survey and China University of Geosciences.

The researchers at Jilin University also overcame some of the challenges of working in extreme cold weather and taking rock samples from a complex environment.

"All these achievements have fully shown the capability of China in independent research and the development of deep-drilling rigs," Sun said.

The Songke 2 project is located in the Songliao Basin, one of the largest continental sedimentary basins in the world, which holds China's most important reserves of oil and natural gas.

"The success of the project will provide key technologies and equipment for exploration and experimental research deep within the earth," said Cheng Qiuming, secretary-general of the International Union of Geological Sciences. "It will also open a new space for clean-energy prospecting in the basin."