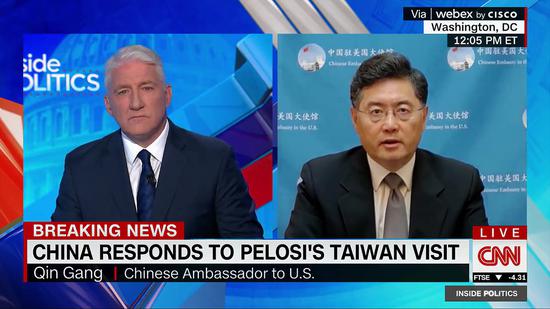 Chinese Ambassador to the US Qin Gang, right, blasts US House Speaker Nancy Pelosi's visit to Taiwan as "reckless and provocative".

China's top envoy in Washington on Tuesday blasted U.S. House Speaker Nancy Pelosi's visit to Taiwan as "reckless and provocative", as foreign policy observers weighed in on the risks generated by the trip.

Disregarding China's strong opposition, Pelosi flew to Taiwan late Tuesday in a serious flouting of the one-China principle and the provisions of the three China-U.S. joint communiqués.

"The speaker's visit is a major event upgrading the substantive relations between the U.S. and Taiwan and sends a very wrong signal to 'Taiwan independence' separatist forces," Ambassador Qin Gang said in an interview with CNN.

"It deals a serious blow to the political foundation of China-U.S. relations (and) seriously infringes on China's sovereignty and territorial integrity. This is a reckless, provocative move," he said.

Qin noted that Pelosi is the No 3 person in the U.S. government after the president and vice-president, and her visit in whatever form and at whatever time during her tenure is fraught with political repercussions, which will result in the escalation of tension across the Taiwan Straits and in U.S.-China relations.

"The current situation is created purely by the U.S. side, and so of course it has to bear the responsibility," he said. "We will take whatever we can to safeguard our sovereignty and territorial integrity. And our response will be very firm, strong and forceful," the ambassador said.

While Pelosi said her trip to Taiwan was to show "democratic solidarity", Qin said that the question of Taiwan is not about democracy but about China's national sovereignty and territorial integrity.

"It is the aspiration of the more than 1.4 billion Chinese people to achieve the reunification of China, and it is an unbending will of the whole Chinese nation to defend our national sovereignty and territorial integrity," he said.

The Democratic speaker is the highest-ranking American official in 25 years to visit the island since Newt Gingrich did as House speaker in 1997. The 1990s visit was wrong and firmly opposed by China, Qin said

"The one mistake cannot justify the following mistakes in the same nature," he added.

A day before Pelosi's visit, White House National Security Council spokesman John Kirby said that "nothing has changed about our One China policy", and he warned China against "overreacting" to the trip.

Michael D. Swaine, director of the East Asia Program at the Quincy Institute for Responsible Statecraft, a think tank in Washington, said on Tuesday that U.S. officials can "talk until they're blue in the face" over not supporting Taiwan independence.

In a series of comments posted on Twitter, Swaine said China believes that the U.S. officials' actions belie their words and regards the Pelosi trip as a "major betrayal of past limits" and a signal of a U.S. desire to "normalize" a one-China, one-Taiwan policy.

"I'd bet a majority of the U.S. public have zero interest in risking conflict w/ a nuke power over an island they can't identify on a map. Yes, the U.S. is deeply involved in preventing (clear) threats (to) TW's security but in this case it has created that threat thru its actions; the CN response was all too predictable (and) the U.S. is trying (to) bluff CN into thinking it is over-reacting," Swaine wrote.

Nicholas Hope, the director of the Stanford Center for International Development, said he had "fervently" hoped that Pelosi was wise enough to avoid going to Taiwan.

"Going there would exacerbate the already delicate state of China-U.S. relations and, I believe, would be in the interests of neither country, nor those of Taiwan," Hope told China Daily.

"Taiwan will not be more secure or more prosperous as a result of this purely symbolic visit, and a lot of bad things could happen," wrote New York Times columnist Thomas Friedman on Monday. "These include a Chinese military response that could result in the U.S. being plunged into indirect conflicts with a nuclear-armed Russia and a nuclear-armed China at the same time.

"It is a measure of our political dysfunction that a Democratic president cannot deter a Democratic House speaker from engaging in a diplomatic maneuver that his entire national security team — from the CIA director to the chairman of the Joint Chiefs — deemed unwise," he wrote.

In a piece titled, "Would You Go to War So Nancy Pelosi Can Visit Taiwan?", Peter Beinart wrote on substack.com: "If her visit sparks a Chinese military response, and brings Washington and Beijing to the brink of war, will they (Washington politicians) enlist their kids to fight?

"It's the kind of question foreign policy commentators rarely ask. It's too impolite. And when it comes to the China debate in Washington, it's this politeness—the failure to talk in blunt, human terms about the consequences of war — that terrifies me," wrote Beinart, editor-at-large at Jewish Currents, a CNN contributor and also a CUNY journalism professor.

"Could a war over Taiwan blow up the entire world? Yes. There are few Americans who know China better than J. Stapleton Roy and Chas Freeman. Roy grew up there and later returned as U.S. ambassador. Freeman served as interpreter when Richard Nixon visited China in 1972. Both have recently warned that a conflict over Taiwan could escalate into nuclear war," Beinart said.

"How many lives are worth risking so Nancy Pelosi can visit Taiwan? It's an impolite question — one that in the coming days the U.S. media should ask again and again."

Ted Galen Carpenter, a senior fellow in defense and foreign policy studies at the Cato Institute, wrote on antiwar.com on Tuesday: "In many ways, Washington's determination to press ahead with greater support for Taiwan as part of an overall containment policy directed against China is reminiscent of the blunders U.S. officials made with respect to NATO expansion, especially the campaign to incorporate Ukraine, and Washington's tone-deaf response to Moscow's escalating complaints.

"The administration must implement a quiet retreat regarding its growing political and military ties to Taipei and adopt a less confrontational approach to Beijing. Moreover, that change needs to go well beyond merely discouraging Pelosi's provocative visit to Taipei," Carpenter said.

"It has become increasingly obvious to PRC leaders that the United States is pursuing a full-blown anti-China containment policy, with Taiwan as the point of the spear, in a desperate effort to preserve Washington's fading strategic primacy in East Asia.

"It is highly unlikely that Beijing will passively accept such an intrusive U.S. presence in China's core security sphere over the long term. As the PRC's economic and military power continues to grow, Beijing's resistance to Washington's hegemonic efforts will escalate," he said.