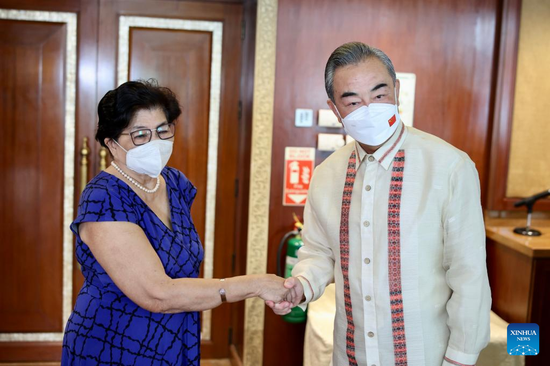 Visiting Chinese State Councilor and Foreign Minister Wang Yi said here on Wednesday that China is willing to deepen pragmatic cooperation with the Philippines to usher in a new "golden age" in bilateral ties.

When meeting with Philippine National Security Adviser Clarita Carlos, Wang said that with joint efforts from the two sides, the China-Phillipines relations have witnessed positive turnaround, improvement and upgrading over the past six years.

The election of Ferdinand Romualdez Marcos as the new Philippine president has turned over a new leaf in the China-Philippines ties as the people of the two countries have a high expectation on the future development of bilateral relations, he noted.

Wang said his visit highlighted China's emphasis on relations with the Philippines and support for the new Philippine government, and it also demonstrated the continuity and stability of Beijing's friendly policy toward Manila.

For her part, Carlos said the two countries have shared people-to-people affinity and close cultural links. The Philippines fully agreed with China on its initiative of building and sharing a brighter future of peace and prosperity in the Asia-Pacific region.

The Philippine side is ready to expand exchanges and cooperation with China, and properly handle differences so as to boost mutual trust, enhance confidence and strengthen friendship between the two countries.

Wang said China will never follow the footsteps of traditional powers that engaged in colonial plunder. China will adhere to its peaceful development and mutually beneficial cooperation, while sharing development opportunities with its neighboring countries, jointly building a community with a shared future for humanity and taking good care of the global village.

He stressed that China and the Philippines are neighbors that have no other choice than to stay true to their friendship. Sound, sustained and stable China-Philippines relations serve the fundamental and long-term interests of the two countries and their people.

The two sides should carry on their traditional friendship, make the China-Philippines relationship more solid and stronger, and keep its development on the right track, Wang said.

The two sides agreed to strengthen people-to-people and cultural exchanges to consolidate the public and social foundation for bilateral friendship.

Wang is on an Asia tour, which takes him to Thailand, the Philippines, Indonesia and Malaysia. He co-chaired the Lancang-Mekong Cooperation Foreign Ministers' Meeting on Monday in Myanmar.