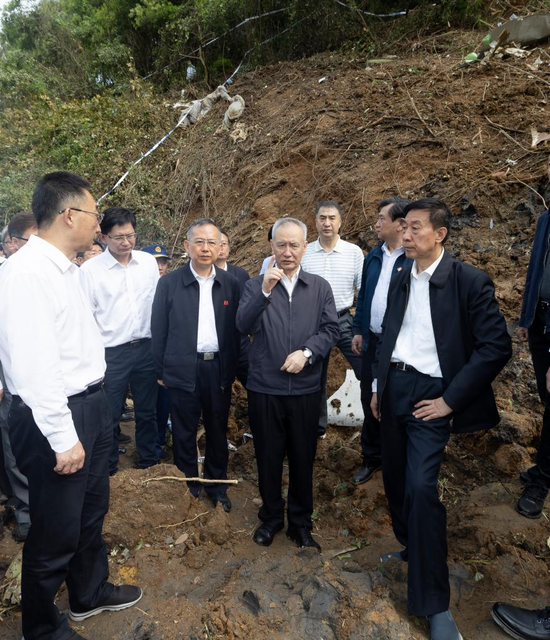 Chinese Vice Premier Liu He, also a member of the Political Bureau of the Communist Party of China (CPC) Central Committee, and Chinese State Councilor Wang Yong guide rescue work at the site of the plane crash of China Eastern Airlines flight MU5735 in Wuzhou, south China's Guangxi Zhuang Autonomous Region, March 22, 2022. On behalf of the CPC Central Committee and the State Council, Liu He and Wang Yong leading relevant officials arrived in Wuzhou to guide rescue work, the settlement of the aftermath and investigation into the cause of the crash. (Xinhua/Liu Bin)

Two senior Chinese officials arrived in the city of Wuzhou early Tuesday to guide rescue work following the crash of a passenger plane carrying 132 people the day prior.

On behalf of the Communist Party of China (CPC) Central Committee and the State Council, Vice Premier Liu He, also a member of the Political Bureau of the CPC Central Committee, and State Councilor Wang Yong, accompanied by other relevant officials, arrived in Wuzhou, Guangxi Zhuang Autonomous Region, to guide the settlement of the aftermath and the probe into the accident.

On Tuesday morning, the two officials traveled to the crash site, where they were updated on the progress of rescue efforts. They also visited and offered support to rescuers.

A special meeting was held after the site visit to study and launch related work, stressing the need for immediate and all-out search and rescue work, and the proper settlement of the aftermath. It called for the organization of experts to conduct comprehensive investigations and collect evidence to identify the cause of the accident.

Public concerns should receive active responses, with information released continuously, according to the meeting. It also urged efforts to launch special safety overhauls of civil aviation and all other key sectors to ward off major and severe safety accidents.

Rescue work is underway and no black boxes have been found so far. The cause of the crash is under investigation.