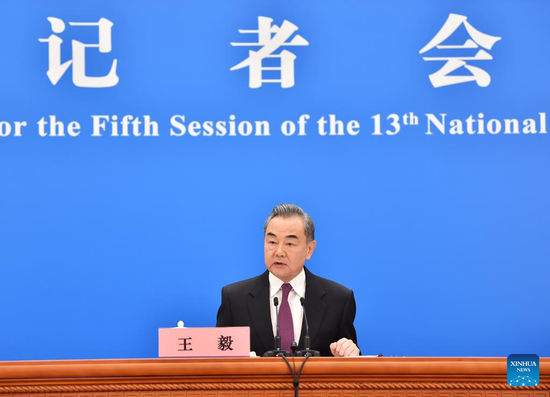 Chinese State Councilor and Foreign Minister Wang Yi attends a press conference on China's foreign policy and foreign relations via video link on the sidelines of the fifth session of the 13th National People's Congress (NPC) at the Great Hall of the People in Beijing, capital of China, March 7, 2022. (Xinhua/Chen Zhonghao)

China's State Councilor and Foreign Minister Wang Yi on Monday stressed that the Taiwan question differs in nature from the Ukraine issue and the two are not comparable at all.

The biggest difference lies in the fact that Taiwan is an inalienable part of China's territory and the Taiwan question is entirely China's internal affairs while the Ukraine issue arose from contention between two countries, namely Russia and Ukraine, Wang said at a press conference.

It is a blatant act of double standards that some people, while being vocal about the principle of sovereignty on the Ukraine issue, have kept undermining China's sovereignty and territorial integrity on the Taiwan question, he said.

The current cross-Strait tension was caused by Taiwan's Democratic Progressive Party (DPP) authority who denied the one-China principle and attempted to change the status quo that both sides of the Taiwan Strait belong to one and the same China, he said, warning that these moves will ruin Taiwan's future.

Meanwhile, some forces in the United States have abetted the growth of separatist forces for "Taiwan independence" and tried to challenge and hollow out the one-China principle, he said, adding that such actions will not only push Taiwan into a precarious situation, but also bring unbearable consequences for the U.S. side.

The future of Taiwan lies in the peaceful development of cross-Strait relations and the country's reunification, rather than "empty promises" made by external forces, he said.

"Seeking foreign support to gain dependence is a dead end. The scheme to use Taiwan to contain China is doomed to fail," he said.